As many as eight trekkers were rescued by the police from Chhatru, while one trekker from Ghepan lake area 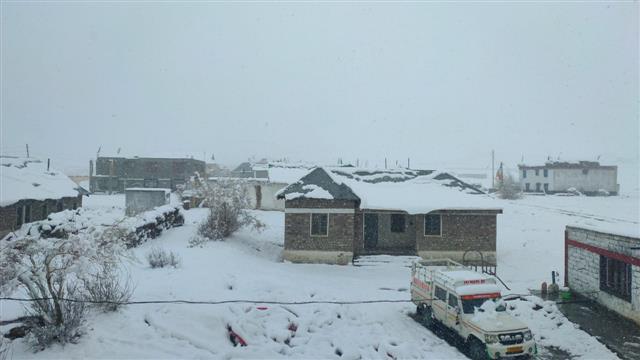 As many as 150 tourists have been stranded at Sumdo in tribal district Lahaul Spiti on Monday evening due to fresh snowfall, which blocked the road for traffic movement in the region.

Around 35 light vehicles and one bus were stuck in the area. The Kaza administration has made arrangements for the stay of these stranded tourists at Sumdo.

As many as eight trekkers were rescued by the police from Chhatru, while one trekker from Ghepan lake area today.

The district administration received information that 11 people have been stuck at Batal, while nine others near Shinkula pass. The rescue teams have been sent to the spot to rescue the stranded people out of the area safely.

Fresh snowfall has crippled normal life in tribal district Lahaul Spiti today, which plummeted the temperature drastically in the region.

Since yesterday, snowfall was occurring in higher reaches, which gripped the entire district under cold wave.

The entire Spiti region has been covered under the white mantle of snow, which delighted the tourists visiting here.

Deputy Commissioner Lahaul and Spiti Neeraj Kumar said those stranded at Batal, had shortage of fuel in the vehicle due to that they were stuck in the area.

They are at a safe place and today fuel has been provided for the vehicle. Tomorrow they will be able to move out of the area.

He said that no person was found stranded at Shinkula pass as informed by the rescue team.

The DC stated that tourists and common people are advised to avoid their journey in high altitude areas in the coming days to avoid any untoward incident.