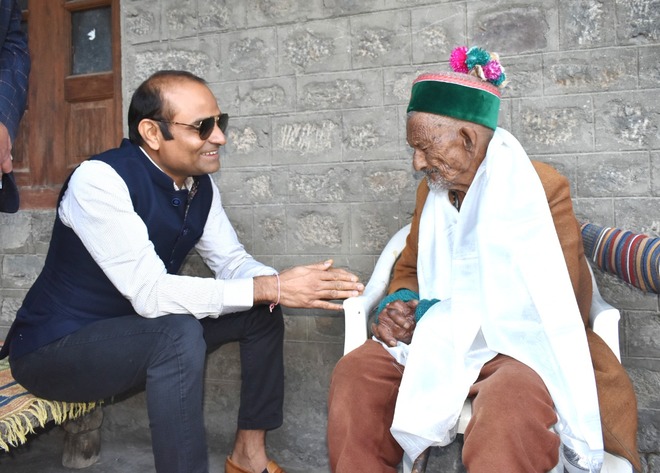 The first voter of Independent India, Shyam Saran Negi (104), has refused to take postal ballot despite being ill and insisted to go to the polling booth for casting his vote on October 30. He has also appealed to the youth to come forward and participate in the democratic process.

Interacting with expenditure observer for the Mandi Lok Sabha bypoll Vimal Kumar Mina, Negi said everyone should vote in the democratic system. He expressed willingness to cast vote at the Government Primary School, Kalpa, in Kinnaur district, where Negi had first voted on October 25, 1951, and earned the sobriquet of the first voter.

Negi, who has been a witness to the election process starting from putting the stamp on a ballot paper to EVMs and now the VVPAT, would be accorded a red carpet welcome. He would go to the polling station in a vehicle provided by the administration. Negi said earlier, he used to keep a tab by listening to news on radio but now his age had taken a toll on his eyesight and hearing abilities.

It was a coincidence that he was a teacher in the same school in 1951 and being a member of the polling party, he reached early and was the first person to exercise his vote. Elections in the tribal area were held in 1951, ahead of polling in other parts of the country in 1952.

Negi, who was also the brand ambassador of ECI earlier, has never missed his date with the elections and has voted in all form of elections.