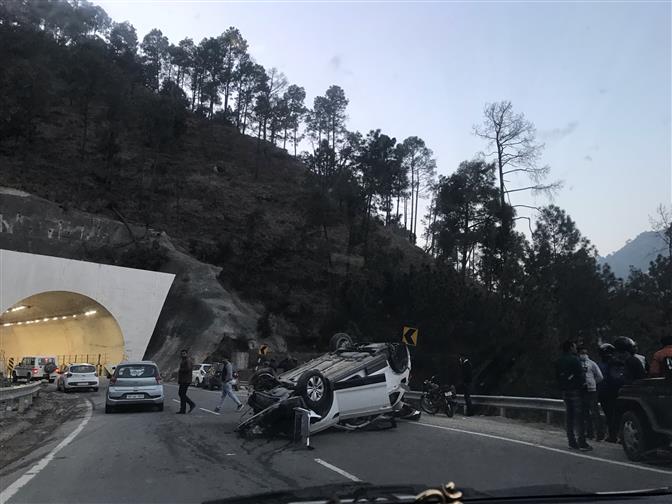 A vehicle overturns near the tunnel on the Barog bypass. Photo: Ambika Sharma

In the absence of any check, the one-way tunnel on the Barog bypass on the four-lane Parwanoo-Solan section of the National Highway-5 has become risky.

It is only meant for traffic coming from the Shimla side, but it has been observed that motorists use it both ways. This has made travelling through the tunnel risky as vehicles are seen rushing in from both sides. It is more after 8 pm and till morning as there is no policeman to monitor commuters.

I had closed the median opening from the Chandigarh side 2-3 times, but since it leads to a private school, it was opened after a few days as it provides an easy way for the commuters. It barely makes a difference of five minutes if one uses the four-lane road instead of the tunnel while going to Shimla. Balwinder Singh, Project Manager, GR Infraprojects

Balwinder Singh, project manager, GR Infraprojects Limited, which four-laned the stretch, said, “I had closed the median opening from the Chandigarh side about 2-3 times, but since it leads to a private school, it is opened after a few days as it provides an easy way for the commuters coming from the Chandigarh side. It barely makes a difference of five minutes if one uses the four-laned road instead of the tunnel while going to Shimla.”

Cases of overspeeding vehicles being overturned have also come to the fore near the tunnel as drivers fail to stop these following another vehicle coming from the opposite side on the same road. Close-circuit cameras have been installed inside the tunnel to keep an eye on the traffic.

“It is high time the police impose penalty on those using the tunnel for a short-cut with the help of the CCTV footages as this alone can discipline the erring motorists,” said Ravi, a daily commuter.

Though one-way signposts have been erected on both sides of the tunnel warning motorists, erring drivers continue to flout the rule. A penalty of Rs 2,500 is supposed to be imposed.

Solan Deputy Superintendent of Police (DSP) Ramesh Sharma said close-circuit cameras were being installed by the district administration inside the tunnel. Its footage would be viewed in the district control and command centre and this would enable them to identify motorists travelling on the wrong side.