Board Chairman to be summoned | Sundernagar, Balh, Nachan MLAs to be invited to meeting 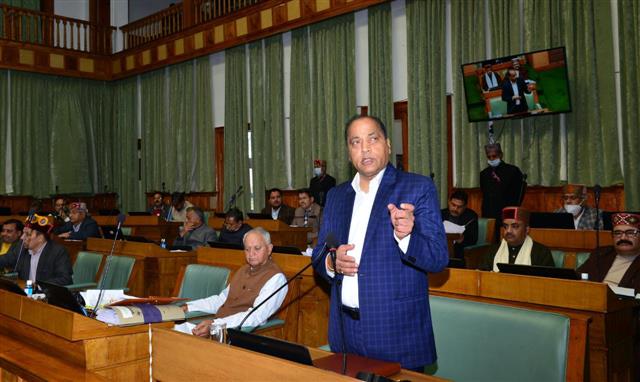 Chief Minister Jai Ram Thakur takes part in the debate on the Budget proposals in the Vidhan Sabha on Wednesday. Tribune photo

Chief Minister Jai Ram Thakur today expressed displeasure at the non-cooperative attitude of the Bhakra Beas Management Board (BBMB) in resolving issues concerning Himachal. He was replying to a question asked by Rakesh Jamwal during the Question Hour in the Vidhan Sabha.

He said that the government had taken up the issues regarding the development of the areas affected by the project, but the response of the BBMB management was non-serious. “Seeing this attitude, we have decided to call the BBMB Chairman so that all issues concerning the state can be taken up with him,” he added.

Thakur said that the MLAs of Sundernagar, Balh and Nachan would also be invited to the meeting so that they could directly raise the issues concerning their constituencies. He admitted that the slush coming out of the Sundernagar BBMB reservoir was causing damage in the area.

To a question of Narinder Thakur, Power Minister Sukh Ram Chaudhary said that solar panels of 5,504 kilo watt capacity had been installed on 583 government offices. He added that so far, no solar park had been set up in the state though the Central Government had approved one solar park of 880 MW capacity for Spiti.

“We have identified seven potential sites for the solar park at Hikkim, Kibber, Hul, Demlu, Lacdarda, Losar and Pod. The park is being set up jointly with Satluj Jal Vidyut Nigam and the DPR will be submitted to the Central Government by May,” said Chaudhary.

He said that a 400 MW solar park had been proposed for Kinnaur and its DPR had been sent to the Central Government. “The state government is providing subsidy for setting up solar units of 10 kilo watt. We have enhanced the subsidy from Rs 4,000 per KW to Rs 6,000 per KW in the Budget to encourage tapping of solar energy in the state,” he added.

The minister, however, said that there was no provision in the rules to allot solar plants to unemployed youth without calling tenders.