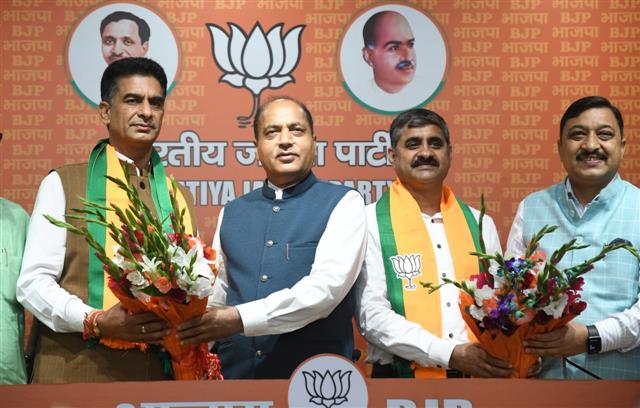 With Himachal Pradesh Assembly elections just a couple of months away, Congress today suffered a major setback as two of its sitting MLAs, including State Working President Pawan Kajal, joined the BJP in New Delhi today.

There had been a lot of speculation in political circles about some Congress legislators deserting the party, which today proved to be true. Pawan Kajal, MLA from Kangra seat in Kangra district and Lakhwinder Rana, MLA from Nalagarh in Solan district had reportedly been upset with the State Congress leadership for creating a parallel leadership in their assembly constituencies to destabilise them.

Infact, the issue had been discussed at the party’s core group meeting in the presence of state observers Chhattisgarh Chief Minister Bhupesh Bhagel, Sachin Pilot and In-charge Rajeev Shukla, earlier this month. Some senior state leaders, including Sukhwinder Singh Sukhu, who is the chairman of the state campaign committee, had warned that in case the trend of creating parallel leadership in Assembly constituencies by assuring them tickets is not stopped, some MLAs could leave the party.

With election nearing, political circles are abuzz with talk of some more Congress MLAs switching sides by joining the ruling BJP. Chief Minister Jai Ram Thakur had hinted that there will be a major setback for the Congress as many of its legislators were keen to join the BJP.

Two independent MLAs--Hoshiyar Singh from Dehra in Kangra and Prakash Rana from Jogindernagar in Mandi district--had joined the BJP about a month back.

The desertions by two Congress MLAs has come at a time when it is hoping to return to power in Himachal. However, with Himachal being the home state of BJP national president Jagat Prakash Nadda, the saffron party will not leave any stone unturned to retain power in the hill state.

As elections draw near, chances of some defections from both the BJP and the Congress cannot be ruled out.

Former BJP state president Khimi Ram had joined the Congress some time back. He is also a former minister, who is keen to contest on Congress ticket from Banjar. Sitting BJP legislator from Mandi, Anil Sharma, son of former telecom minister Sukh Ram, could also head back to the Congress as he has been completely alienated by the BJP after his son Ashray Sharma contested the Mandi Lok Sabha election in 2019 from the Congress.

Meanwhile, there is also talk of some other BJP leaders including a minister, who want to launch their sons into politics in this year’s Assembly elections, joining the Congress, as the BJP is unlikely to give them ticket, considering its stand against dynastic politics.