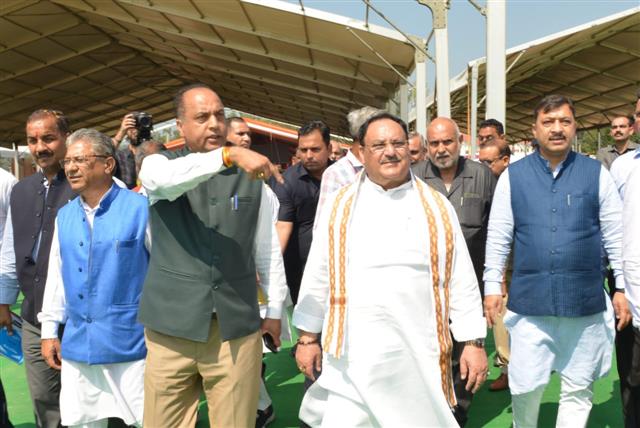 Himachal is all set to welcome Prime Minister Narendra Modi in Bilaspur on October 5, said BJP national President JP Nadda here today. He appealed to people and BJP workers to make the upcoming rally a success.

Nadda held a meeting of the district unit of the BJP.

Kashyap said that there was a lot of enthusiasm among the party workers about the Prime Minister’s visit. “AIIMS will provide world-class facilities to a large number of people,” he added. Saudan Singh said that the BJP was a worker-based party and excitement was visible among people. The rally would be a grand success, he added.

Khanna said that Modi had given to Himachal a bulk drugs park and a medical devices park, which would further enhance its capabilities in the health sector.

All leaders visited and inspected the ground where the Abhinandan rally would be organised. Later, Nadda virtually took stock of the rally preparations. — TNS

It is an honour for Himachal that the Prime Minister will dedicate AIIMS built on 247 acres to people. — JP Nadda, BJP national president