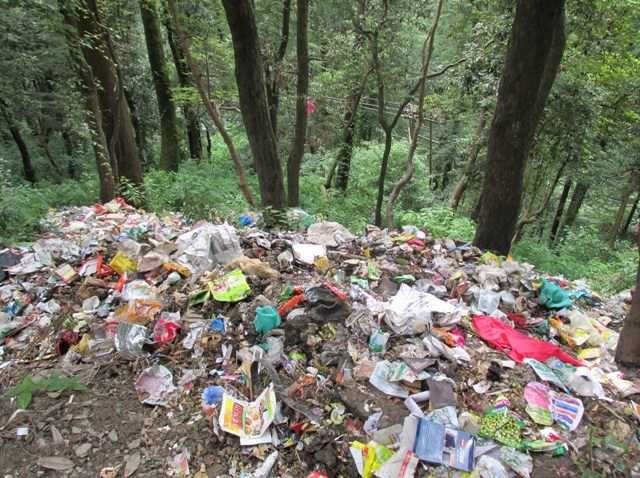 A spot in the Bir-Billing forest area strewn with garbage.

Residents of Bir-Billing staged a protest here recently over tourists littering the forest land with plastic junk, such as wrappers, mineral water and liquor bottles.

The protesting residents said plastic junk littered in the forest could harm the ecology of the hill state and result in the death of wild animals. The authorities concerned should address the issue at priority, they said.

Heaps of chips packets and foil papers had become a common site in Bir-Billing, despite a ban on the sale and use of plastic in the state. Most of the forest land and picnic spots were littered with plastic waste and there was no one to clean the area.

The government agencies responsible for managing the forest affairs had become a mute spectator, allowing dumping of plastic even in local rivulets. The forests in Bir-Billing had virtually turned into a dumping ground, they alleged.

Though the state government was charging green tax from the tourists visiting Billing, the money was not being utilised to clean the surroundings. The Special Area Development Authority (SADA) was turning a blind eye to the situation, the residents maintained.

Thousands of tourists visit Bir-Billing daily. In 2018, the NGT had issued orders to the state government to install a garbage treatment plant here. Environmentalists attribute careless dumping of plastic items by tourists to lethargic monitoring by the officials.

While most part of the region falls under the reserved forest category, the remaining areas are governed by the Municipal Councils and Muncipal Corporations. “Sustaining the biodiversity of the area is not possible without cooperation of the tourists, who by and large, lack civic sense. They fearlessly throw away plastic items after use,” some forest officials said.