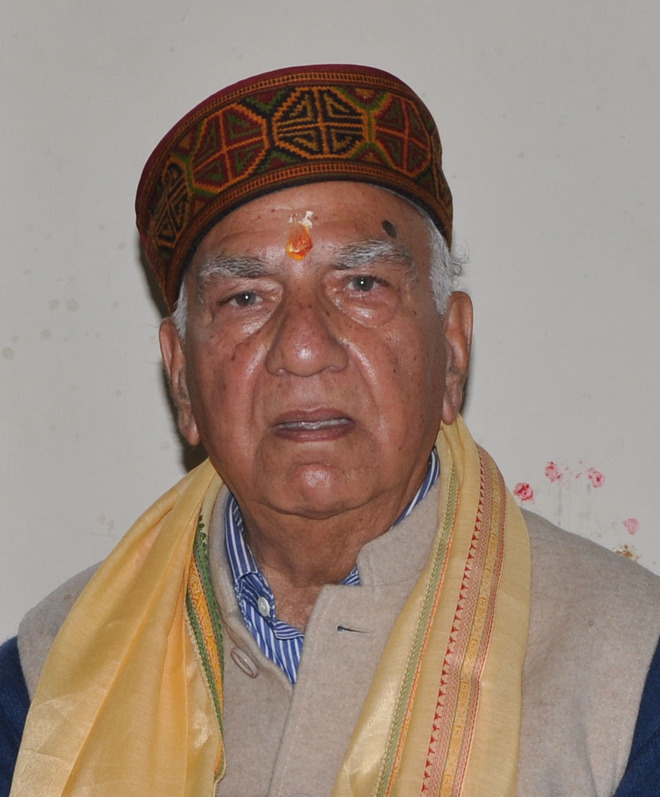 Remarks by veteran BJP leader Shanta Kumar on BJP’s indulgence in horse trading to grab power in his autobiography couldn’t have come at a more inappropriate time as the party faces flak for toppling duly elected governments.

Shanta Kumar, a two time Chief Minister who now forms part of the side-lined marg darshak mandal of the saffron party, has done what comes naturally to him – speaking his heart even if it means paying a heavy price for it.

His autobiography “Nij Path ka Avichal Panthi”, with a picture of his with his wife on the cover, released on Tuesday has kicked off a political storm with Congress leaders demanding a probe into his claims in the book.

The veteran leasder, who lost his wife to covid last month, has maintained a low profile ever since as he too is recovering from the infection.

Shanta, a writer and poet who has authored several books, has always maintained that he has paid a heavy price for calling spade a spade but he had no regrets about it.

Shanta Kumar’s book, as expected only unravelled many more truths. One being that he lost his chair in the Union Cabinet in 2003 after he unearthed Rs 300-crore scam when he was Union Minister for Rural Development.

He has stated that he brought the facts to the notice of the then Prime Minister AB Vajpayee. Shanta Kumar claimed that instead of initiating action against the culprits, he was forced to step down, a heavy price for his honesty. Earlier there were presumptions that Shanta Kumar was removed from Vajpayee cabinet for his remarks on Gujarat riots.

In the second part of his book, the veteran leader has gone to the extent of saying that he feels “ashamed” to see his party getting involved in “sale and purchase” of MLAs.

“People made the BJP the world’s largest party due to its value and idealism, but now it has become power-hungry,” he wrote in his new book.

In one of the paragraphs, titled, ‘Neej Path Ka Avichal Panthi’, Kumar also cautioned the BJP against adopting “unprincipled politics”.

Referring to former Prime Minister Atal Bihari Vajpayee, Kumar wrote, “We all have joined politics to change society and not the government.”

In one of the chapters “Role of Jana Sangh and BJP”, Shanta wrote that the BJP should not compromise with its principles and values. “When we worship Swami Vivekananda, we should also follow the path of Vivekananda,” he writes.

Shanta Kumar also wrote that Prime Minister Narendera Modi should bring stringent laws to curb the use of black money in elections and keep criminals out of politics, which is the need of Indian politics in present political scenario.