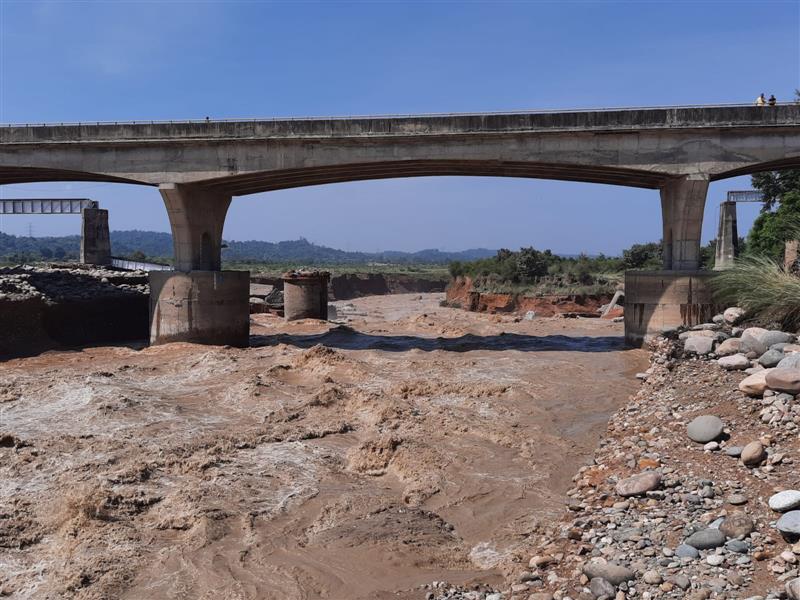 The Chakki Bridge on Pathankot-Mandi NH-154 at Kandwal.

Following the recommendations of the National Highways Authority of India (NHAI), the Kangra and Pathankot district authorities closed the inter-state Chakki road bridge on the Pathankot-Mandi highway at Kandwal in Nurpur last night.

The change in the Chakki rivulet’s course towards pillar number 1 and 2 in Punjab due to severe flash floods posed a threat to the existence of the pillars. Earlier, the bridge had been closed to traffic on August 20 and re-opened in the evening on August 22.

The NHAI, which deployed its machinery to divert the course of the rivulet on Monday after the water receded, has intensified its operation by deploying more machinery on Thursday. Project director of the NHAI, Palampur, Anil Sen, along with some technical experts of the Army, examined the condition of the pillars.

SDM, Nurpur, Anil Bhardwaj, who also visited the riverbed, told The Tribune that all efforts had been initiated by the NHAI to divert the rivulet’s course away from the pillars to ensure the smooth water flow without causing any damage to the pillars.

“However, these pillars have been exposed due to change in the rivulet’s course after flash floods,” he said.

An official of the NHAI said safety measures may take 10 to 15 days forcing the administration to keep the bridge closed. The SDM said the bridge would be opened only after getting a technical clearance report from the NHAI.

Meanwhile, commuters from Pathankot had a tough time when they reached the bridge entry point. They were sent back to take the alternative Pathankot-Lodhwan-Kandwal route to enter the state.