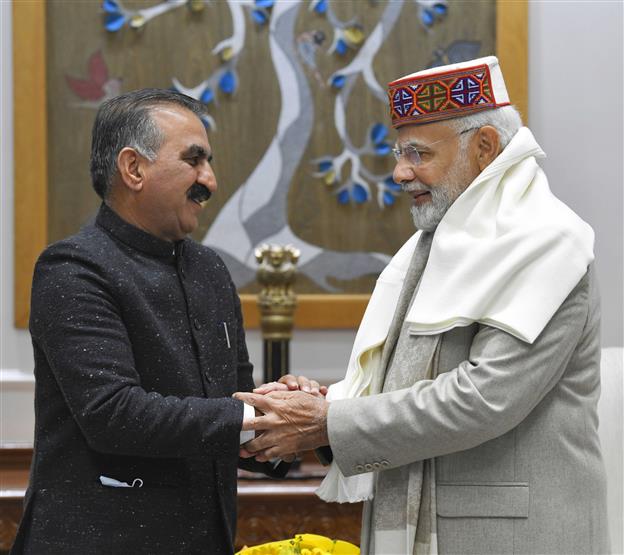 Sukhu discussed with the Prime Minister various development projects under implementation in the state and requested him for liberal financial assistance for giving a fillip to ongoing works.

The Prime Minister congratulated Sukhu on becoming Chief Minister and assured him of all possible support to the state. Sukhu also assured the Prime Minister that his government would effectively implement Central schemes such as the Pradhanmantri Gati Shakti Yojana aimed at revolutionising infrastructure and the Parvatmala Yojana for the construction of ropeways.

The Chief Minister said, “These schemes will immensely benefit the people of the state. Connectivity and infrastructure development are the main focus areas of the present government, besides generating employment for the youth.”

He presented the Prime Minister with a traditional memento, a Himachali shawl and a cap

The Chief Minister also met Dr Jitendra Singh, Union Minister of State, Science and Technology, Space and Atomic Energy. He urged the Union minister to include Chamba district in the Aroma Mission for cultivation of lavender plants and to provide technological support to farmers for it.

He also requested Dr Jitendra Singh for a high-tech seismic laboratory-cum-data analysis centre in the Kangra and Hamirpur seismic zone. He told the Union minister that the state was more prone to natural calamities.

Sukhu said, “There is need to set up Doppler radars in Kinnaur and Lahaul and Spiti districts, besides establishing weather observatories at Hamirpur, Chamba, Nalagarh, Keylong and Kaza regions. A data centre should be set up in Hamirpur district to strengthen disaster response, analysis and dissemination of weather information. This will not only help save lives but will also give timely weather information to farmers and horticulturalists.”

He held deliberations with the Union minister on strengthening agriculture, horticulture and the health sector by adopting modern techniques and by making the best use of science and technology in the state.

Sukhu said, “The state government is planning to set up a Department of Nuclear Medicine in one of the medical colleges of the state so that the facility of radiation therapy can be provided to cancer patients. The need of the hour is to adopt the modern scientific methodology of farming instead of practising traditional methods. We have requested the Union minister for technological support in this regard.”