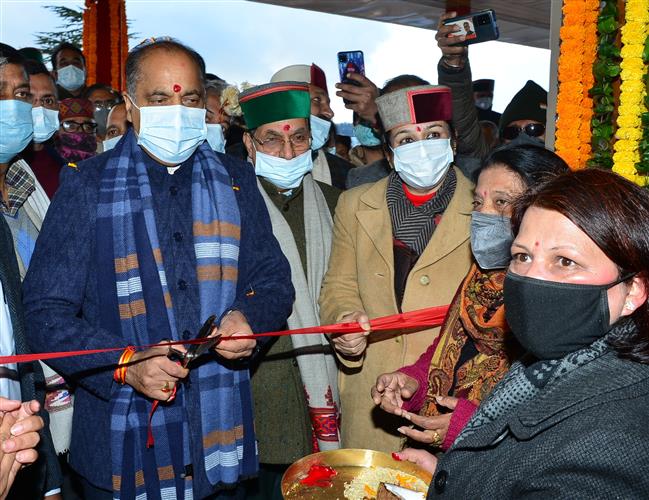 Chief Minister Jai Ram Thakur today inaugurated the Dhalli heliport near the Sanjauli-Dhalli bypass here constructed at a cost of Rs 18 crore. “Shimla is an international tourist destination but the city did not have a helipad, leave aside a heliport. Now with the heliport becoming functional, we intend to conduct joyrides and use it to launch air ambulance facility,” said Thakur.

“The heliport inaugurated today can be used to launch the Udan-II scheme to provide air connectivity to the state capital, which had long been deprived of air connectivity. It required almost 45 minutes to reach the Jubbarhatti airport but now with the heliport functional, the travel will be more convenient for people,” he said.

The Chief Minister said that the Central Government had provided Rs 12.13 crore for the project under the Himalayan Circuit of the Swadesh Darshan programme and Rs 6 crore under the Udan-II scheme. He added that the heliport would provide much-needed relief to high-end tourists visiting the state. It could also be effectively used in case of a medical emergency as it is located near the IGMC Hospital, Shimla.

Thakur said, “The three-storey heliport has all modern facilities such as a reception counter, manager’s office, ticket counter and a VIP lounge. The heliport also has Porata cabin facilities for the arrival of passengers, parking for 50 vehicles, decks for helicopters and safety nets”.

“The heliport is spread over 10.3 bighas and has been beautified with mural paintings. It is fully equipped with CCTV surveillance system. Heliports are also being constructed at Baddi, Rampur and Mandi under the Udan-II scheme,” he added.

The Chief Minister said that the state government would soon send a proposal for the construction of new heliports at Reckong Peo, Chamba, Dalhousie, Jhanjeli and Jawalaji to the Union Ministry of Tourism and Civil Aviation.

Thakur said that emphasis was being laid on air connectivity along with widening of national highways connecting main tourist destinations of the state. At present, there are 64 helipads in the state and the state government was constructing 38 more helipads, he added.

He said that heliports and helipads were a must to promote tourism. Besides, they could also be used to launch rescue operations and shift patients to big hospitals during an emergency.

It required almost 45 minutes to reach the Jubbarhatti airport, but now with the heliport functional, the travel time will reduce. — Jai Ram Thakur, Chief Minister