Demands expansion of rly network in meeting with Railway Minister 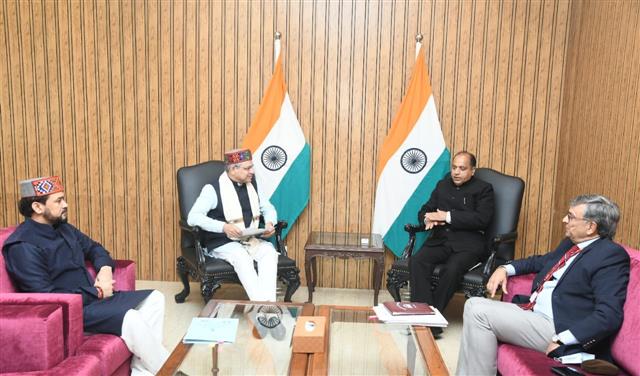 The Chief Minister also requested her for financial assistance for the Mandi airport.

In the meeting with Mansukh Mandaviya, Thakur sought 50 ambulances to reduce the response time within the prescribed limits in the hilly terrain. He also apprised the Union Health Minister of the shortage of ASHA workers in the state, which was adversely impacting quality outreach in comprehensive primary health care in the urban areas of the state.

He also requested the Health Minister to grant a bulk drug park to the state, which would strengthen industrialisation.

Thakur discussed various issues related to the power sector, including the installation of smart meters, pump storage and energy policy with RK Singh. He also discussed the highlights of the Swarn Jayanti Urja Niti launched by the state and requested him for a detailed interaction to hasten the process of delayed projects.

CM Jai Ram Thakur urged Union Railway Minister Ashwini Vaishnav for the expansion of the rail network in the state and upgrading the Kalka-Shimla track.

At a meeting with the minister in New Delhi today, he requested him to speed up the work on the Bhanupali-Bilaspur line and added that its extension up to Leh was important from a strategic point of view.

He said a survey on the line was over. Union Minister for Sports, Information and Broadcasting Anurag Thakur was also present at the meeting. The CM urged the Railway Minister for upgrading the Kalka-Shimla track as the speed of the train was very slow and new coaches should be added to the train.