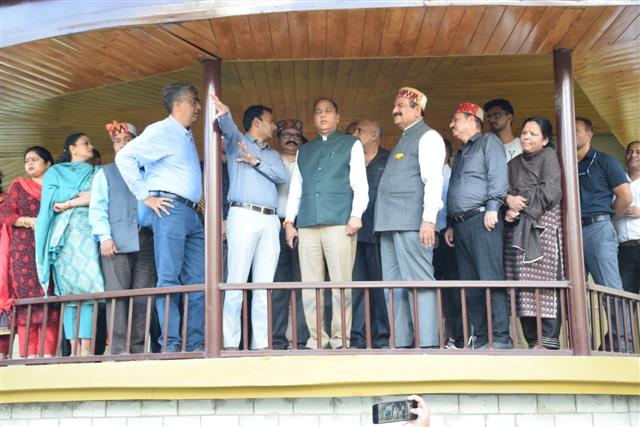 Chief Minister Jai Ram Thakur reviews the arrangements for Dasehra at Rath ground in Dhalpur at Kullu on Monday.

Chief Minister Jai Ram Thakur today took stock of the arrangements for Dasehra at the Rath ground in Dhalpur in view of the proposed visit of Prime Minister Narendra Modi on October 5. The Prime Minister is scheduled to take part in the historic rath yatra during the opening day of the seven-day Kullu Dasehra festival.

Thakur examined the necessary preparations to be made at the ground and ordered officials concerned to ensure smooth conduct of the rath yatra. He said that Narendra Modi would be the first Prime Minister to witness the historic rath yatra and take blessings of Lord Raghunath and other deities. He added that the Prime Minister’s presence would further popularise the festival globally.

Kullu Deputy Commissioner Ashutosh Garg said that security would be heightened for the Prime Minister’s visit. He added that all people would have to abide by the protocols of the Special Protection Group (SPG). He advised people not to carry electronic keys, lighters, matches, pen knives and other prohibited articles during the rath yatra.

He said that as per the tradition, the Governor would inaugurate exhibitions and cultural programmes at the Kala Kendra in the evening to let the festival begin.

Garg said that the Prime Minister would share dais with the Governor and the Chief Minister to witness the rath yatra. He added that the rath yatra was generally held from 3 pm to 4 pm and traffic would be regulated accordingly.

He said that the administration had not received information about the visit of any other senior leaders like BJP national president JP Nadda and Union Minister for Information and Broadcasting Anurag Thakur.