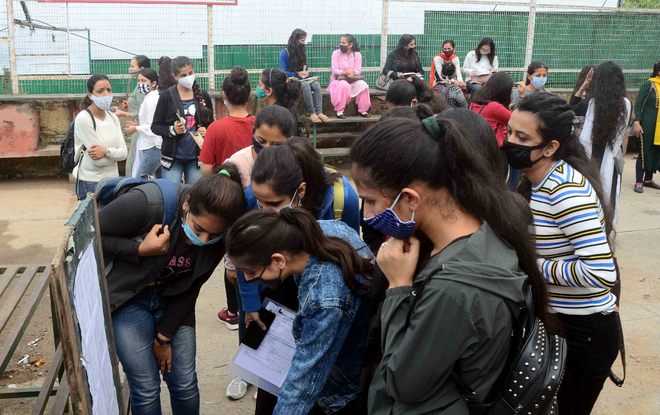 Students have a look at the sitting arrangements at RKMV College, Shimla.

There was confusion among students today as Himachal Pradesh University (HPU) went ahead with the final-year undergraduate (UG) examinations in spite of the order by the High Court which said the HPU might not proceed with the exam schedule.

After taking the note of the fact that the similar kind of petition is pending before the Supreme Court, a Division Bench comprising Justice Sureshwar Thakur and Justice CB Barowalia observed that the university might not proceed with the schedule and listed the matter for hearing on August 19.

VC to move HC for review

The court passed the interim order on a petition filed by Yaseen Mohd, contending that the Centre had not allowed the opening of schools and colleges till date. Despite that the HPU had issued a schedule for the final examinations. He filed the petition, seeking postponement of the examinations due to the Covid threat.

Education Minister Gobind Thakur said the government came to know about the court orders this morning and by the time, the examinations had already been started. He said, “The similar matter is pending in the apex court but no stay has been granted and the University Grants Commission has also given approval for holding the examinations. We have made elaborate arrangements for these.”

“We are consulting legal experts and filing a Special Leave Petition (SLP),” he said.

The HPU authorities and officials of the Education Department are tight-lipped on the issue.

The faux pas has caused embarrassment to the government and students, their parents and people at large are at a loss to know the reason for the serious communication gap.

“The authorities have created a lot of confusion. Students from outside the state have already reached the centre to appear in the examinations and now there is a complete chaos”, says the father of a student.

Some advocates must have appeared in the court or through video-conferencing on behalf of the university and the government during the hearing on August 14 and it was baffling that the orders did not reach the government, said a senior advocate.