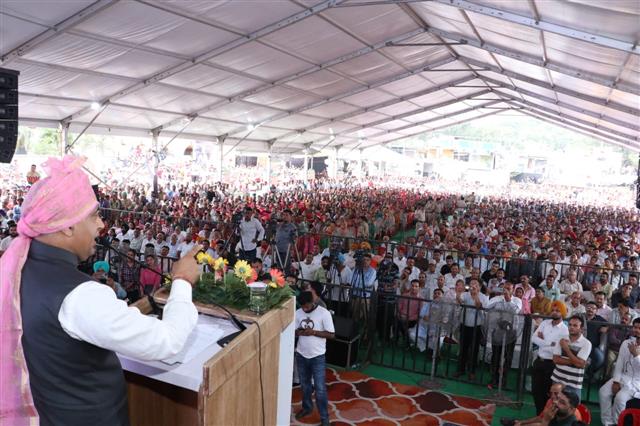 Chief Minister Jai Ram Thakur said today at Nalagarh that the Congress was facing a leadership crisis and had no issues to raise. He addressed a ‘Pragatisheel Himachal: Sathapna ke 75 Varsh’ programme.

He said, “It is ironical that a party that has ruled the country for 50 years is taking out the ‘Bharat Jodo Yatra’. After Uttar Pradesh, Haryana, Uttarakhand, Goa and Manipur, the BJP will again form government in Himachal Pradesh.”

Thakur asked the Opposition why it was taking out the Rozgar Yatra in the state when it had failed to address the problems of unemployed youths during its 50-year rule.

Ticket aspirants were vying for proximity to the Chief Minister. Former MLA KL Thakur and newly inducted Congress MLA Lakhwinder Rana accompanied the Chief Minister on the dais. He asked them to work in unison.

The Chief Minister assured the local truck union of resolving their freight and GST-related problems.

He said that former Prime Minister Atal Bihari Vajpayee had given impetus to industrialisation in the state. He inaugurated and laid the foundation stone of development projects worth about Rs 83 crore for Nalagarh.