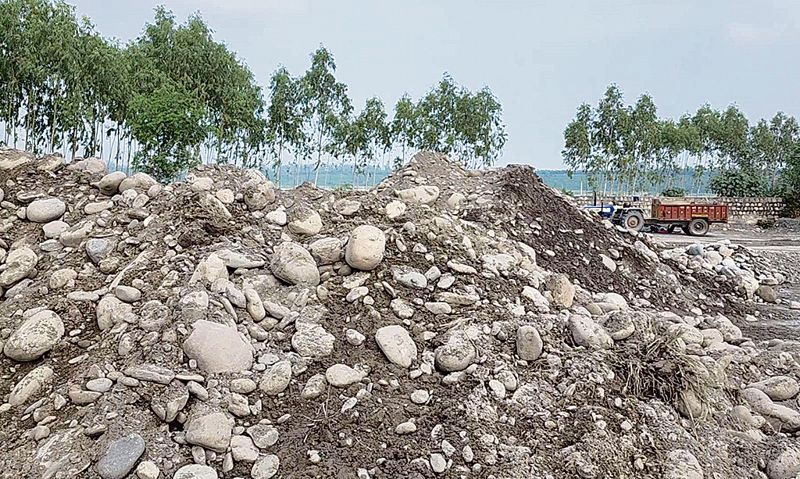 Forest clearance of three major quarries in the Paonta Sahib area of Sirmaur district is awaited since 2016. In the absence of this clearance, curbing illegal mining has become a major challenge for the authorities in Yamuna riverbed lying at the Himachal-Uttarakhand border. Miscreants from the neighbouring Uttarakhand exploit the undefined lease area lying at the border and indulge in indiscriminate mining.

The leased area of Uttarakhand includes the left bank of the Yamuna river. Though mining material is to be lifted only at night, shorter escape routes from Himachal, barely 10 m away, are used by illegal miners to carry quarry material on the sly during the day to Uttarakhand.

In a bid to speed up legal extraction of quarry material, the state government has accorded environmental clearance (EC) to three lessees in the Yamuna riverbed over an area measuring 35.94 hectares. The state government is losing revenue through this proliferating illegal activity. An annual royalty of about Rs 25 crore to Rs 30 crore would be earned once the three quarries become functional.

“The three lessees, who have already obtained EC, were pursuing their cases for obtaining forest clearance from the Ministry of Environment, Forest and Climate Change. We are facilitating them to resolve the queries raised by the ministry. This will speed up the clearance and once legal mining begins, the illegal activity in the vulnerable Yamuna riverbed from the neighbouring Uttarakhand would be effectively curbed,” informed Suresh Bhardwaj, Geologist, who looks after the said zone.

The FCI clearance will give a major boost to legal mining in this bordering belt. Indiscriminate mining was also environmentally damaging.

The absence of a well-defined boundary, where the mining area often overlaps in both states, has been causing unresolved disputes.

Police, on its part, has stepped up efforts to curb illegal mining. “Raids are being conducted in the Yamuna and Giri riverbeds bordering Uttarakhand. Penalty of more than Rs 1 lakh has been realised from 20 tractor trailers engaged in the illegal activity at various riverbeds in Paonta Sahib since August,” informed DSP Paonta Sahib, Bir Bahadur.