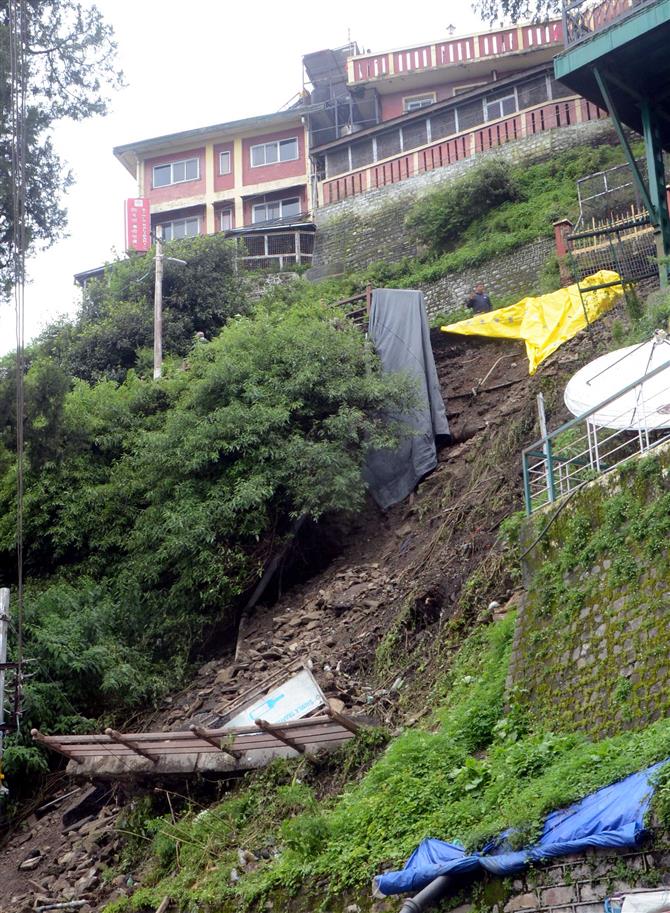 Debris blocked the road after a landslide near Kalibari temple in Shimla on Wednesday. Photo: Lalit Kumar

With four more deaths (one each in Kangra, Mandi, Sirmaur and Una districts) in rain-related incidents, the death toll in the current monsoon season has mounted to 258. Himachal has suffered a loss to the tune of Rs 1367.33 crores since June 29.

As many as 107 roads, 43 in Kullu, 22 in Chamba, 20 in Mandi, nine in Shimla, eight in Sirmaur, three in Solan and two in Kangra district, are closed for vehicular traffic.

Ongoing wet spell of moderate rainfall is likely to continue in low and mid hills for the next two days. Heavy rainfall associated with one or two spells of very heavy rainfall are likely in parts of Chamba, Kangra, Hamirpur, Mandi, Kullu, Shimla, Sirmaur, Solan, Bilaspur, Una and adjoining areas, MeT office said.

The weather office said that landslides, rockslides, shooting stones and disruption of traffic across different roads are expected due to continuous rainfall. There could be a sudden increase in water level in Sutlej, Beas, Ravi rivers and their tributaries. Increased water flow in streams, nullah and other channels could lead to flash floods and probability of cloudbursts in isolated parts of districts of Chamba, Kangra, Mandi, Kullu, Shimla, Lahaul and Spiti and Kinnaur cannot be ruled out.

A landslide occurred near Kalibari temple in Shimla.

Landslides, shooting stones and disruption of traffic are expected due to continuous rainfall. There could be a sudden increase in water level in rivers. — MeT Office