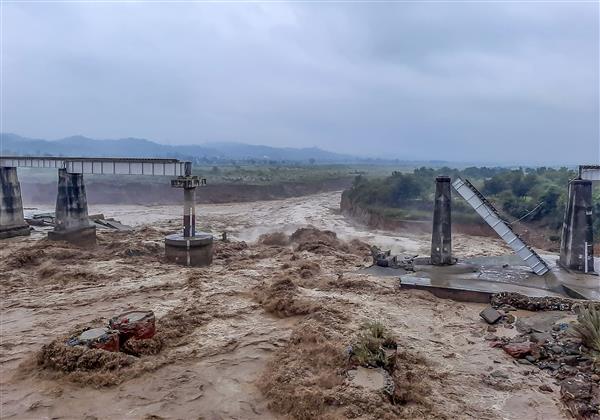 The collapsed railway bridge over the Chakki rivulet in Nurpur. File photo

Locals consistently flagged the mining threat to the bridges on the Chakki rivulet, a tributary of the Beas, in Nurpur but the administration paid no heed to their warnings.

Had the government taken note of the persistent demand of villagers to check illegal mining on the banks of the Chakki rivulet, the collapse of the inter-state railway and national highway bridges connecting the state with Punjab could have been averted.

The national highway single-lane bridge on the Chakki had collapsed in July 2007 (the new one was built in 2011) while the railway bridge for the Pathankot-Jogindernagar narrow gauge line was washed away on Saturday.

Countless representations to the Chief Minister, Mining Department, Sub-Divisional Magistrate (Nurpur), complaints on the CM helpline and a massive protest outside the Dharamsala Vidhan Sabha in December 2019 went unnoticed. With the collapse of two bridges at Kandwal in Nurpur within a span of 15 years, the demand for declaring Chakki rivulet a no-mining zone has now got louder with the locals insisting on a ban on mining in the area. As per the HP Mining Rules, 2015, mining activity is not allowed 200 metres upstream and 300 metres downstream near NH bridge but one can see tell-tale signs of mining activity on the riverbed. Incidentally, the Railways too had written to both Punjab and HP to check the illegal mining endangering the rail bridge.

Despite the successive governments’ tall claims to curb the mining, the menace continues unabated, allegedly indicating a deep nexus between the mining mafia, political leaders and bureaucracy.

Hoshiyar Singh, president of Kangra unit of the Bharatiya Kisan Sangh, claimed that 15 villages under Jikli Khanni, Uprli-Khanni, Hadal and Baduee panchayats in Nurpur were badly affected due to the illegal mining. “Illegal mining is carried out at night, but the authorities concerned turn a blind eye,” he alleged. The illegal mining has also rendered the agricultural land barren and dried up the underground water sources, he added.

Nipun Jindal, Deputy Commissioner, Kangra, meanwhile, said the authorities would establish effective coordination between the Mining Department and the police to check the menace.

Efforts in the past to set up a mining checkpost in Chakki area failed due to non-availability of land. We will now focus more aggressively on checking illegal mining on the rivulet banks. — Kangra DC