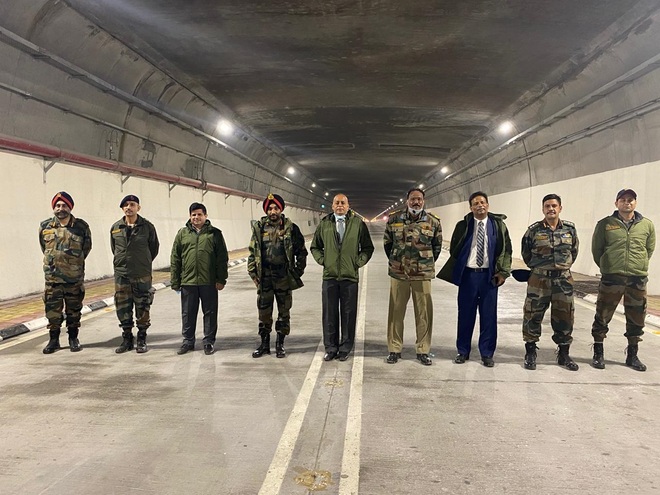 Dr Ajay Kumar, Defence Secretary, visited the Atal Tunnel today. He was accompanied by DGBR Lt Gen Harpal Singh and Joint Secretary, Border Roads Organisation. Almost all works of the tunnel having been completed, it is poised for inauguration. Prime Minister Narendra Modi is likely to visit Manali to inaugurate the tunnel on October 3.

KP Purushothaman, Chief Engineer, Atal Tunnel Project, briefed the dignitaries on all the aspects of the tunnel. He also briefed them on all arrangements for the impending inauguration.

The Defence Secretary inspected the works and congratulated the Border Roads Organisation for overcoming challenges and completing an engineering marvel. He also gave his suggestions for further futuristic additions and improvements to the project. He interacted with the local administration of Kullu, Manali and Lahaul to take stock of inauguration preparation.

The Atal Tunnel has been constructed in the Pir Panjal ranges of Himachal Pradesh primarily because the Manali-Sarchu-Leh road remains closed for six months of a year as the mighty Rohtang Pass remains snow bound between November and May. The tunnel will ensure round the year connectivity to the tribals, besides reducing the road length of Manali-Sarchu-Leh road by 46 km. Besides, the tunnel will offer the security forces a major strategic advantage.

The tunnel is a state-of-the-art work and offer features like lighting, ventilation and Intelligent Traffic Control Systems and while constructing it tough challenges like high overburden, extreme temperatures and remoteness had to be overcome.