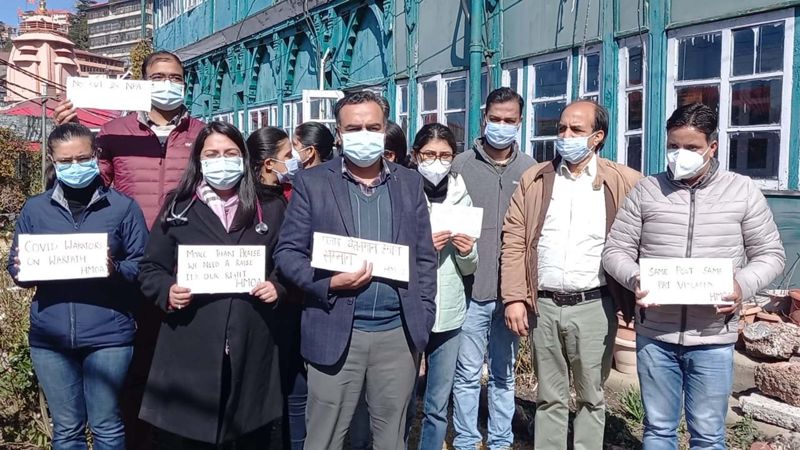 Doctors observe a strike for their demands at the DDU Hospital in Shimla on Thursday. Tribune photo

Doctors have started their statewide protest with a two-hour pen-down strike in all hospitals.

“All allopathic doctors, including teaching faculty of medical colleges and resident doctors, went on a pen-down strike for two hours from 9:30 am to 11:30 am,” said Dr Pushpender Verma, secretary of the Joint Action Committee of allopathic doctors. “Dental doctors and veterinary doctors, too, joined us,” he said.

They would continue the strike till February 17. “If the government doesn’t talk to us and agree to our demands, the strike will turn into a full-fledged one,” he said.

The doctors have been demanding that the Punjab pay scale should be implemented in totality. They are demanding that the non-practising allowance (NPA) should be paid to them at 25 per cent of their basic pay and their basic pay plus NPA should be capped at Rs 2,37,600 on the Punjab pattern. “We are not fighting for any incentive. It’s a matter of our salary and we are not going to accept any unreasonable deductions,” said Dr Verma.

Their other major demands include the continuation of 4-9-14 scheme and full salary to contractual medical officer at entry levels. “The promotional avenues are very limited in our profession. The 4-9-14 scheme provided some comfort to the doctors, who were not getting promoted. Its discontinuation is disturbing for them,” said Dr Verma.

He said they had been talking to the government for over a month now and had even shown their resentment. “The government ignored all this, so we were forced to up the ante. Now, we have decided that we will not back down until the government accepts our demands,” said Dr Verma.

Incidentally, almost all healthcare workers have been agitating for one reason or the other. While contractual workers employed under the National Health Mission had gone on a day’s strike a few days back, 108/102 ambulance workers too sat on more than a week-long protest outside the NHM.

Now, with all doctors heading towards a full-fledged strike, patients are in for some tough time.