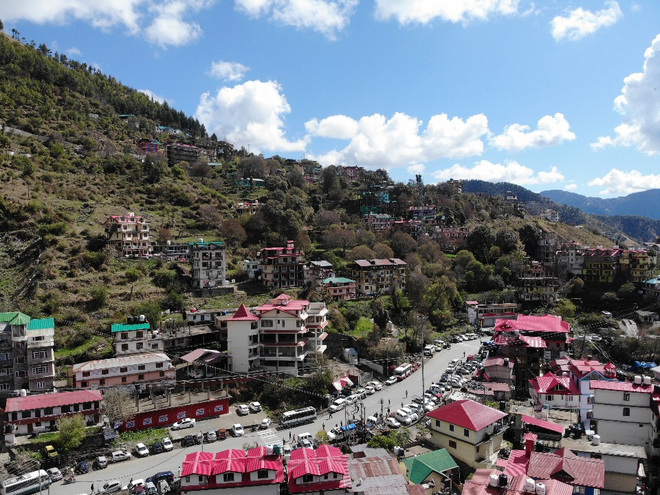 Drone surveillance by the police during curfew in Shimla on Saturday. Tribune photo

The police used a drone to check curfew violations in Shimla on the fourth day of the restrictions imposed.

The drone was used on The Ridge, The Mall, IGMC, Lakkar Bazaar, Sanjauli and Lower Bazaar areas to ensure that there was no gathering of people.

It was used to map activities and ensure that people did not gather in large numbers and maintained social distancing, said DGP SR Mardi. A control room would inform the nearest police station and patrolling vehicles about any activity spotted by the drone.

Congested areas like The Mall Road, The Ridge, temples and main bazaars were surveyed and no crowding was spotted. There was no panic and people were disciplined during the curfew relaxation and maintained distance, maybe because they had been assured of the regular supply of essential items.

Four cases of curfew violations were registered today, taking the total number of cases in the past four days to 189. As many as 269 persons were arrested, including 19 under preventive sections, and 91 vehicles plying without valid permission were impounded. For the first time, a fine of Rs 4,000 was imposed on the violators at Baddi.

Meanwhile, 23 policemen, who were to retire on March 31, were given a three-month extension while 14,000 policemen had been put on 24-hour duty to combat coronavirus, Mardi said.

Inter-state borders had been sealed to ensure that no person or vehicle enters the state and the police had been posted in strength to check crowding, he added.

The cyber crime branch of the Himachal Police has cautioned people against falling prey to nefarious tactics of criminals asking for donations in the name of Covid-19 through malware links. “These criminals taking advantage of the situation may target innocent people by sending links like Spy max, Corona live and Wuhan live to hack their computers,” said Narvir Singh Rathore, Additional SP, Cyber Crime Branch.

“Fake domain names such as coronavirusstatus.space, coronavirus-map.com and others have been created and attempts are also being made to cheat people in the name of health organisations of the state and Central governments and also the WHO,” he said. The users should verify the links before giving any donations, he added.

Rathore asked the internet users not to give any personal information such as user name, password or bank ATM card numbers as banks or authentic agencies do not ask for such details, which could be misused.