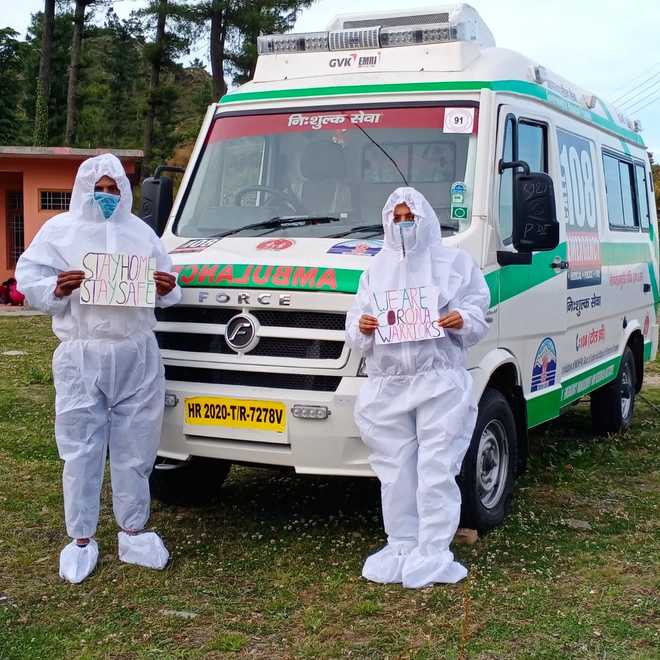 The ambulance staff are serving without taking breaks, sometimes for over 36 hours at a stretch, to ferry patients to hospitals.

Amid the surge in Covid-19 cases, the demand for ambulance service has increased manifold in the district.

This situation has put an immense pressure on ambulance service provider GVK EMRI in the district. The company is operating under public-private partnership mode in Himachal.

Its employees say the situation is getting very challenging for them day by day due to the increase in cases in the district.

They said they were serving without taking proper breaks, sometimes for over 36 hours at a stretch, in order to transport Covid-19 patients from their native places to Covid hospitals.

They said there were ambulances attached with government hospitals at various locations in Mandi district which were non-functional due to official apathy. The Chief Medical Officer of Mandi should take stock of such ambulances and engage these along with its staff for transportation of patients in emergency cases.

They said it was a war-like situation and it was the responsibility of each person to do the needful to deal with the situation effectively. The Chief Medical Officer should direct Block Medical Officers to make use of these ambulances in emergency service with immediate effect. It would definitely ease the pressure on GVK EMRI authority, they said.

In Mandi district, there are a total of 31 ambulances under the GVK EMRI authority to provide service to patients in emergency cases, out of which five were non-functional.

GVK EMRI Ambulance Service state head Mehul Sukumaran said, “Due to the increase in cases, most of the ambulances were engaged in transportation of Covid patients. As a result, the transportation gets delayed for regular emergency patients.”

“If all ambulances, which are attached with government hospitals, are made available on road for emergency services, it will help us provide better service to people in this crucial time,” he said.

Despite repeated attempts, Mandi Chief Medical Officer Dr Devender Sharma could not be reached on his phone for a comment.