Extradosed bridge to come up on Kaithlighat-Dhalli stretch : The Tribune India

Extradosed bridge to come up on Kaithlighat-Dhalli stretch 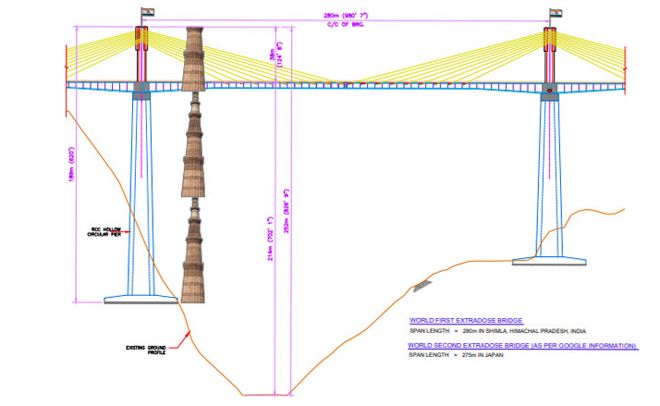 The “world’s longest extradosed single-span bridge”, which is slated to be constructed on 620-feet-high pillars (approximately equal to the height of three Qutub Minars) near Shakaral on the Kaithlighat-Dhalli stretch of the Parwanoo-Shimla four-laning project, is set to become another tourist attraction.

There will be only two pillars in this 280-m-long single-span extradosed cable bridge to be constructed at a cost of Rs 600 crore in three years and the height of the bridge (top of the pillar) from the ditch will be 826 feet, said National Highways Authority of India (NHAI) regional officer Abdul Basit.

He said the bridge would be built by the state-of-the-art technology on the Shakral-Dhalli section of the stretch by Gawar Infrastructure Company, Gurgaon. He added that the beautification of pavements and lightning would add to the appeal of the bridge.

“This will be the world’s first extradosed bridge with a span length of 280 m, surpassing the 275-m-long span extradosed bridge in Japan, as per information collected from Google,” said detailed project report (DPR) consultant, Intercontinental Techno Consultant, Neeraj Choudhary.

There will be only two pillars in this 280-m-long single-span extradosed cable bridge to be constructed at a cost of Rs 600 crore in three years. The height of the bridge (top of the pillar) from the ditch will be 826 feet. —Abdul Basit, Regional officer, NHAI

The total cost of the project is Rs 3,915 crore, which includes the construction of five tunnels measuring 5.14 km in length and five major and one minor bridge, besides 22 viaducts.

The length of the longest and shortest tunnels is 2.66 km and 242 m, respectively. The bypass would be linked at seven points with Shimla city.