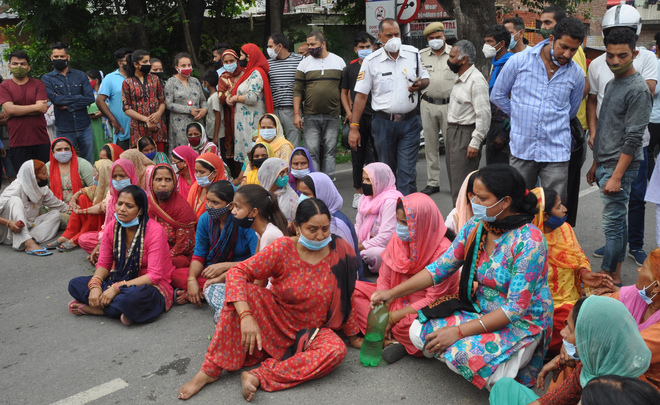 A feud between two families from Veerta village, near Kangra, turned violent and reached up to the Matour-Kangra national highway, leaving four people injured. Two of them were seriously injured and referred to PGI, Chandigarh.

A feud between two families from Veerta village, near Kangra, turned violent and reached up to the Matour-Kangra national highway, leaving four people injured. Two of them were seriously injured and referred to PGI, Chandigarh.

The sources said Kartar Chand, along with his family members, attacked his neighbour Rakesh Kumar and his family with sharp weapons today morning. In the attack, four members of the family of Rakesh Kumar got injured and were referred to the Tanda medical college. Two of them were later referred to PGI, Chandigarh, as their condition was serious.

After the attack, residents of Veerta village came to the main Matour-Kangra road and blocked the national highway. The traffic blockade continued for over an hour, leading to long queues of vehicles on the road. People lifted the dharna from the road after Kangra SP Vimukt Ranjan and the SDM reached the spot. The police arrested nine person involved in the feud and registered a case of attempt to murder against them. — TNS

‘India is proud of its players’, ‘never ever give up’ encouraging words flood twitter to cheer Hockey team