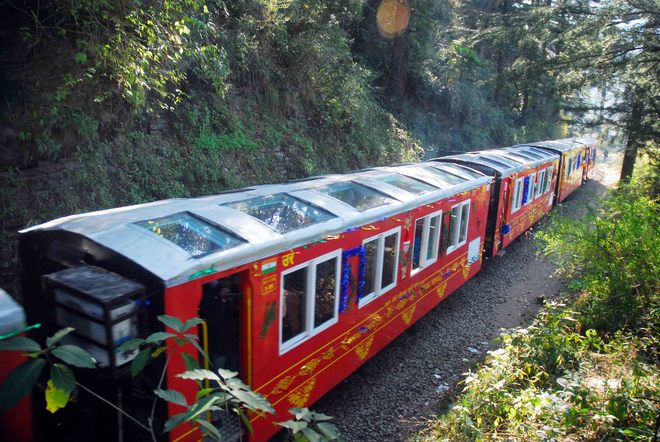 Snaking past the winding track through the hilly terrain, the train — Him Darshan Express — with seven see-through coaches (six first-class AC vistadome coaches and one first-class coach), treated passengers with breathtaking view of the rugged mountains, lush pine forests, waterfalls, valleys and picture-perfect hill stations along the way.

With the one-way fare per person fixed at Rs630, the train was flagged off from Kalka at 6.55 am and reached Shimla at 12.25 pm while briefly halting at Barog.

To start with, the air-conditioned train, which has the capacity to provide a comfortable journey to 90 passengers, has been introduced for one year. “The seats are reversible and can be adjusted to overcome travel sickness. It has executive seats and attached toilets,” said Station Superintendent Prince Sethi.

Each coach offers facilities such as wider unplasticised polyvinyl chloride (UPVC) windows, window roller blinds as well as honeycomb blinds, adjustable or reversible seats for passengers to have rich experience of site-seeing from inside the train, modular switches and sockets for LED lighting and charging gadgets, modernised toilets with western-style commode, steel dustbins etc.

Sethi said: “On the return journey, the train will depart from Shimla at 3.50 pm and will reach Kalka at 9.15 pm. It will again stop at the Barog station en route.”

He said the train had received overwhelming response and the bookings were full over the next few days in view of the peak tourist season and New Year being round the corner.

“It was an awesome experience to move past beautiful hilly landscapes with tunnels and picturesque unexplored areas,” said Rajat, a tourist from Delhi, adding that the journey could become more pleasurable if the time was reduced by an hour.

The Britishers laid the first rail track to connect Shimla in 1903. In 2009, the Kalka-Shimla rail track was declared a world heritage site by UNESCO. An incredible feat of engineering, 94-km railway track with 18 stations en route was built in 1903 and covers staggering 102 tunnels, 864 bridges and 919 stunning curves.

The highlight of the journey is Barog station, which has the longest tunnel (tunnel 33) on the route, stretching 1,143.61 metre. Also, bridge number 226 is an architectural marvel that passes over a deep valley surrounded by steep hills on both sides. However, it is difficult to see this bridge from the carriage. Earlier, vistadome coaches were attached to the train introduced on this narrow-gauge railway track but it is for the first time that vistadome train (glass top) Him Darshan Express (No 53459 and 52460) have been introduced and toilets have been attached on demand of the commuters.