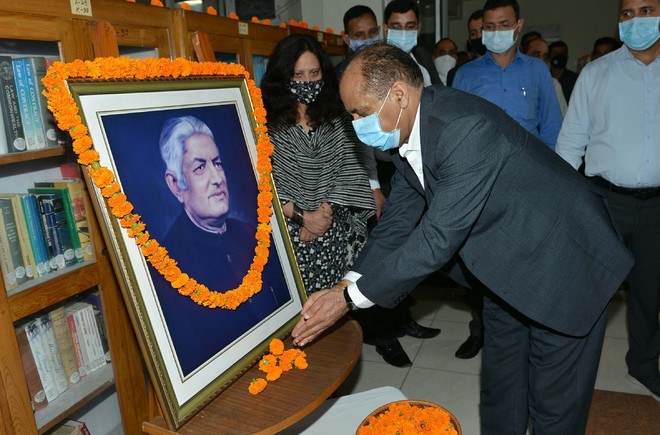 Governor Bandaru Dattatreya and Chief Minister Jai Ram Thakur paid floral tribute to the founder and first Chief Minister of Himachal Pradesh Dr YS Parmar on his birth anniversary on his statue at The Ridge, today.

On the occasion, the Governor said that Dr Parmar was not only a politician but also a man of stature whose life was based on values.

He was familiar with tough geographical conditions of the hilly region and, as a Chief Minister, he paved the way of development in Himachal Pradesh by paying more attention to agriculture and horticulture sector.

The greatness of Dr Parmar was his simplicity. When he left the CM post, he left the government vehicle and used a public transport to his village.

The Governor said that Dr Parmar had great respect and pride for the Himachali culture and lifestyle and gave priority to development needs of people.

He said that the people should take inspiration from life and works of Dr Parmar and progress of backward areas would be a true tribute to him.

Patriotic songs and bhajans were recited by the artists on this occasion.