Fresh bids invited, tender process likely to be over in March 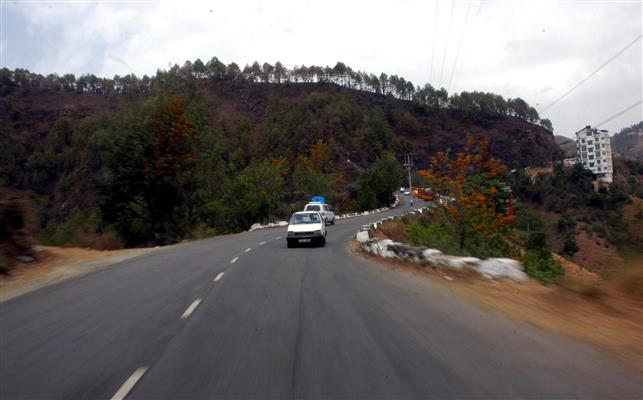 The national highway near Kaithlighat at Shimla. Photo: Amit Kanwar

The NHAI has terminated the contract given to Chetak Enterprise to construct the Kaithlighat-Dhalli section of Parwanoo-Shimla four-laning project due to tardy progress. Fresh bids have been invited and the tender process is likely to be completed in March.

Two twin tube tunnels and 20 bridges will be built in the first stretch for which the forest clearance is almost complete. The second stretch will have three tunnels and seven bridges, including the 580-metre-long extra dose cable bridge to be built 240 metres above the ground level at Rs 300 crore. To avoid dumping of debris in forests and drains, 13 sites have been identified.

It will go a long way in decongesting Shimla and provide better connectivity to the Tibet border and other tourist places en route and provide easy passage during medical emergencies, said NHAI Regional Officer Abdul Basit.

Earlier, the work was assigned to Chetak Enterprise in April 2018 and the contract was terminated as only 2 per cent work was executed against a target of 30 per cent, sources in the NHAI said.

The project had run into rough weather after the executing company slowed down the work following change in the scope from two-lane carriageway to four-lane in 2019.

The pace of work is expected to accelerate in the next financial year. The new highway will bypass Shimla and reduce the distance between Kaithlighat and Dhalli from 40.1 km to 28.4 km.

The project had run into rough weather after the executing company slowed down the work following change in the scope from two-lane carriageway to four-lane in 2019.