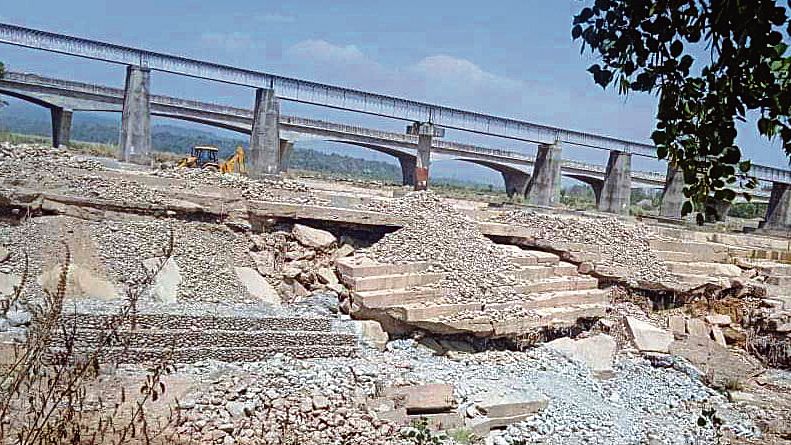 The dilapidated railway bridge on Chakki rivulet at Kandwal in Nurpur. Tribune photo

The Railways has suspended remaining four up and down daytime passenger trains on the Pathankot-Jogindernagar narrow gauge rail line, keeping in view the threat of landslides on the railway track. The decision to suspend the train service was taken on Saturday. The Northern Railways, Ferozepur, had earlier suspended three up and down night trains on this route on July 1 in view of the monsoon rains.

The authorities concerned in Himachal Pradesh have failed to check large-scale illegal mining in Chakki rivulet near this bridge despite several reminders from the railway authorities in the past. At present, the supporting pillars and protection wall of the bridge have become weak and are facing the threat of its collapse.

Inquiries reveal that the railway department has spent lakhs of rupees on the repair of protection wall and pillars of this bridge during the past several years but the ongoing illegal mining has deteriorated the condition of the bridge.

Official sources in the local railway department said the higher authorities had issued an order on July 15 to cancel all trains on this route due to damage to protection wall of the bridge number 32 (on Chakki rivulet at Kandwal).