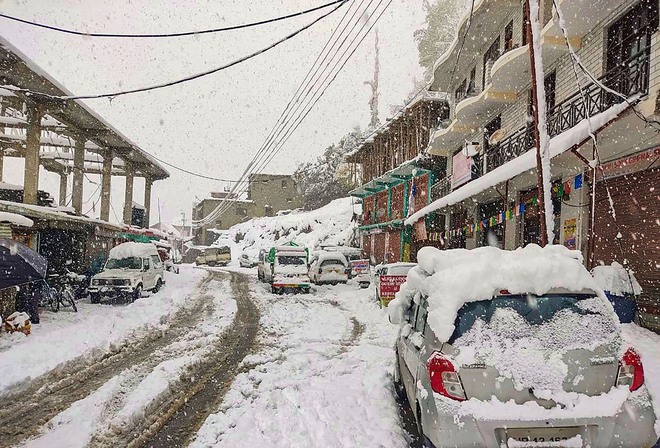 Snow falls at Keylong in Lahaul and Spiti district on Monday. PTI

Fresh snow has hampered the traffic movement in Lahaul-Spiti, which affected the normal life in the region. Keylong has received over 20 cm snowfall, while the Baralacha La on the Manali-Leh highway has received 45 cm fresh snow.

The Himachal Road Transport Corporation (HRTC) Depot at Keylong has suspended its bus service. Travelling has become a risky affair on the internal roads of the Lahaul valley.

The district administration has stopped traffic beyond Keylong towards Leh and Udaipur. The movement of tourist vehicles has been restricted beyond the north portal of Atal Tunnel.

The Rohtang Pass also received a snowfall. As a result, the Kullu district administration has restricted the traffic movement beyond Gulaba. The fresh spell of snow has brought cheers among farmers because snow is considered as white manure. It provides moisture and maintains temperature for better production of crops.

The fresh snowfall at Rohtang and its nearby places has elated the hoteliers of Kullu-Manali, who are expecting good business in the coming days. The tourists were visiting Sissu and Keylong through Atal Tunnel and Gulaba near Manali to enjoy the snow.

Deputy Commissioner, Lahaul Spiti, Pankaj Rai told The Tribune: “Due to fresh snowfall in the Lahaul valley, the traffic movement has been restricted for the next few days. The Kunzum Pass in Spiti also received snow. As a result, traffic has been restricted beyond Losar.”

The DC stated that as soon as weather becomes suitable, the Border Roads Organisation would start snow-clearing operation on the Manali-Leh highway.