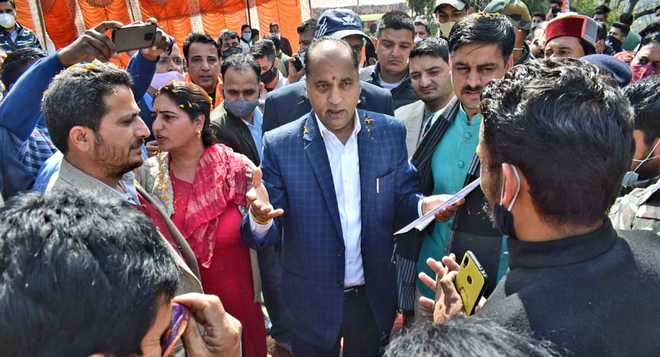 Chief Minister Jai Ram Thakur today asked BJP workers in Mandi to gear up for the upcoming Municipal Corporation elections. He said that BJP office-bearers and workers should ensure victory in the Municipal Corporation elections. He called upon them to work unitedly and continue the victory campaign, as most of the BJP-supported candidates had won the municipal committee and panchayati raj elections in the state. He was presiding over the closing ceremony of the two-day BJP’s Prashikshan Varg of Mandi parliamentary constituency.

Thakur took a dig at Mandi Sadar MLA Anil Sharma and said that the MLAs of the three new municipal corporations of Mandi, Palampur and Solan were not from the BJP and it was necessary to win where the party had lost. He added that Sharma should attend the Prashikshan Varg.

The Chief Minister said that no government had two consecutive terms in Himachal for long and the BJP would make history by again winning the Assembly elections in 2022. He said that he was confident that the mission repeat would be successful with the unified efforts of the BJP members.

Thakur said the functioning of the BJP was different from other political parties because it works on an ideology while the other parties compromise with their ideologies for power. He added that discipline, traditions and sacrifice comprised the identity of the BJP and that was why it had emerged as the largest political party in the world today.

The Chief Minister later presided over a meeting of the Himachal Pradesh Beopar Mandal. He said that traders made an important contribution to the state’s economy and the government was ready to protect their interests. He added that the Goods and Services Tax (GST) had been simplified, as per the suggestions of the traders. The government was sensitive to the problems of the Beopar Mandal.

He said the construction work of the Shivdham in Mandi would commence soon.