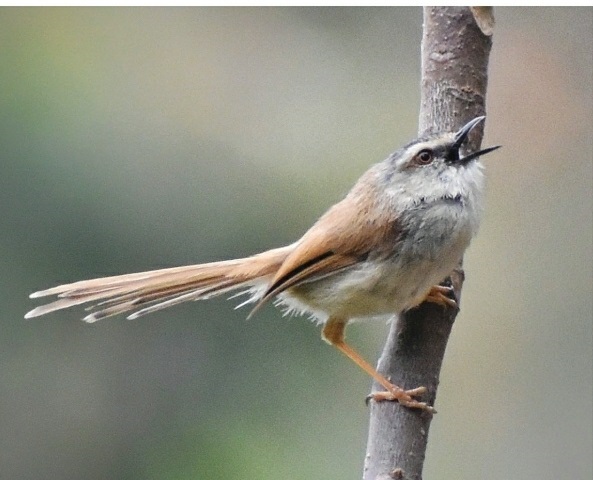 The bird was spotted at Majathal wildlife sanctuary during a study.

A globally threatened bird, grey-crowned prinia, has been spotted for the first time in the state in upper Sakor village of Kunihar tehsil. This was reported during a faunal estimation study undertaken by the state’s wildlife division in Majathal wildlife sanctuary in Solan district.

Principal Chief Conservator of Forests, Wildlife, Rajiv Kumar, while confirming the news, said the grey-crowned prinia is threatened due to habitat loss especially due to degradation and conversion of grasslands and its IUCN status is vulnerable.

The International Union for Conservation of Nature (IUCN) is the global authority on the status of the natural world. “Although the bird was sighted previously in Uttarakhand, this is the first record of this bird having been sighted in the state and also its northmost range extension in India,” said Rajiv Kumar.

Virender Kumar Bhardwaj and Rakeshwar Kapoor, were assigned the faunal study by the state wildlife wing’s DFO Krishan Kumar. The duo surveyed the Majathal Wildlife Sanctuary for its faunal assessment from February 20 to March 31, 2021.

Bhardwaj, who is pursuing PhD from Guru Nanak Dev University, Amritsar, told The Tribune that,

“On March 16, 2021, I saw a small bird jumping on the branches of a phoenix silvestris tree, near Sakor village, Kunihar tehsil. I took a record photograph before the bird flew away. The bird couldn’t be identified in the field. I forwarded the photographs to my friends.”

He said, “It was suspected to be a grey-crowned prinia, but it couldn’t be confirmed as the photographs were not clear enough, and this species could be confused with its congeners.”

They revisited the place on March 21 to confirm its identification. Six birds were recorded and decent photographs were captured during this visit.

“A contrasting blue-grey crown, thin bill, prominent supercilium contrasting with dark eye stripe and lores and warm rufous upperparts were clearly seen, which confirmed it as grey-crowned prinia. The striated prinia P crinigera was also present in the same locality.”

The researchers, however, rued that forest fires are common in the sanctuary which pose a major threat for the bird.

Besides, there are two quarries and cement manufacturing units close to the sanctuary which pose a pollution threat.

They suggested a detailed survey in the suitable habitats in the sanctuary and the surrounding unprotected areas besides taking proper steps to safeguard the future of the species in this region.