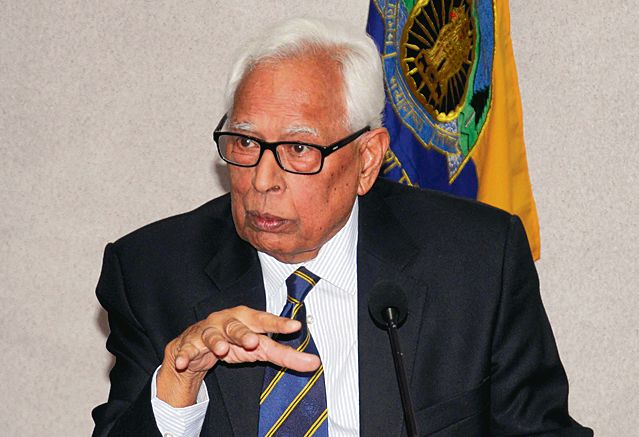 Former Governor NN Vohra today said it is only through good governance and effective policing that the resurgence of pro-Khalistan forces in Punjab can be dealt with effectively.

Delivering a talk on “Internal Security” at the State Police Headquarters here for police officers from across the state, the former Defence and Home Secretary expressed serious concern over anti-national and subversive elements spreading their networks from one shore to another and activating their sleeper cells whenever they found it opportune to strike, particularly when the domestic environment is disturbed with communal divisiveness.

Criminalisation of politics, unless liquidated, shall result in eroding the people’s faith in democracy and trust in the ruling dispensation NN Vohra, former Governor of J&K

Replying to a question on the situation in Jammu and Kashmir, he observed that the biggest challenge in the coming months as the Union Territory advanced towards elections would be to ensure prompt and efficient governance at the ground level, which resolved the people’s grievances without delay or harassment. In the background of political hurt, it was of crucial importance to create an atmosphere of calm and normalcy, which would also ensure large-scale participation in the coming polls.

In response to a question by a young lady officer, Vohra expressed anxiety over failure to check the growing criminalisation of politics. He observed that this phenomenon, unless liquidated, shall result in eroding the people’s faith in democracy and trust in the ruling dispensation. Citing recent media reports, he observed that over 43 per cent of those comprising the State legislatures and Parliament were said to be having criminal cases against them, even charges of murder and other heinous crimes.

Tracing the history of internal security management in the country, in the decades since independence, Vohra pointed out that internal security was an important element of National Security which embraces myriad concerns covering almost all aspects of governance. After Pakistan launched its proxy war in Punjab and Jammu and Kashmir, it was not feasible to separately deal with internal and external security challenges, both of which had got closely intertwined. It was therefore, of vital importance to take a holistic view of all security issues in evolving the National Security Doctrine, he said.

Vohra underscored the need for the political executive at the Union level to hold urgent discourses with the States to evolve a ‘Draft National Security Policy’ which would facilitate much closer functioning between State and Central intelligence agencies and effective coordination between State and Central police organisations. He stressed that consultations with the States also required to give urgent thought to the need to establish an all-India cadre of highly-trained professionals who ensured the entire pan-India network of security management units. Such a cadre, comprising officers drawn from the civil police, defence services, science and technology, banking and other services, after being given specialised training, could comprise the National Security Administrative Service.

He remarked that national security management was no longer the job of a generalist. Multiple sub-cadres of personnel trained in various specialised sectors were required to keep a vigil over the country’s security. Vohra lamented the failure of the Union and State authorities to push Police Reforms. “This lapse is entirely due to the lack of political will,” he remarked. In this context he recalled the Criminal Nexus Report (which he had furnished to the Union Government in October 1993) which brought out the danger posed by dishonest public servants, political leaders and the mafia networks joining hands to subvert the functioning of the established authority and posing a serious threat to the integrity of government functioning.

Vohra said the police dealt with an ever-growing number of tasks but received no thanks from society. “State governments must divert urgent attention to dealing with the many constraints faced by the police, which include inadequate budgetary allocations. With almost 85 per cent going to meet the salaries, very little is left, if anything at all, to meet the requirement of funds for training, weapons, equipment, transport and other requirements, including housing for the constabulary.

He expressed concern over the serious gaps in the required strength of both civil and armed police forces. He cited that the all-India strength of the civil and armed police forces, IRB and the District Armed Police Reserves as on January 1, 2020 was 20.19 lakh, of which there were nearly six lakh vacancies. This left about 15 lakh personnel for a population of 139 crore of people. He added that the per capita spending on police was a miserly Rs 2.73 per day.

Vohra also referred to the many and growing challenges faced by the police force besides an enhancing number and variety of crimes — corruption, drugs and narcotics network, operation of organised crime and recently drones dropping weaponry. Besides dealing with a horde of challenges on varied fronts, the police organisations had also to generate a culture of equality, to negate the constabularies being immersed in caste, class and ethnicity, he remarked.

Director General of Police Sanjay Kundu detailed the initiatives taken by the Himachal Police in terms of pre-emptive and predictive policing which had helped in reducing crime, especially against women and children and also in bringing down fatal road accidents and significantly reducing mortalities and injuries.