The Congress on Thursday wrested Himachal Pradesh from the BJP winning 40 seats in the 68-member Assembly in the hill state which maintained its tradition of not voting any incumbent government to power since 1985.

According to the results declared by the Election Commission, the BJP won 25 seats, while eight state ministers, including Suresh Bhardwaj, Ram Lal Markanda and Surveen Chaudhary lost.

The Independents won from three constituencies and the Aam Aadmi Party, which had contested from 67 seats, failed to open its account.

Congress president Mallikarjun Kharge hailed the people of Himachal Pradesh and his party leaders as the Congress secured a much-needed win, riding on anti-incumbency and a slew of poll promises, including bringing back the old pension scheme and providing jobs to the youth and Rs 1,500 to every woman.

Party leader Rahul Gandhi assured the people that every promise made by the Congress will be fulfilled.

The Congress has convened a meeting of all its newly-elected MLAs in Himachal Pradesh in Shimla on Friday and the meet is likely to pass a resolution authorising the Congress president to elect the CLP leader.

The Congress’ vote share was 43.9 per cent and the BJP’s was 43 per cent - a gap of less than one per cent which was highlighted by both Prime Minister Narendra Modi and BJP chief J P Nadda in their address to party workers in Delhi after the poll results were declared.

The BJP had given the slogan of “Raj nahin, riwaz badlega”, which translates to “the convention will change, not the government”, but failed to buck the trend. Himachal Pradesh has not voted any incumbent government to power since 1985.

Nadda thanked the BJP workers for their hard work in his home state Himachal Pradesh and asserted “raj may have changed, but ‘riwaz’ also changed as there was a gap of less than 1 per cent in vote share of the top two parties”.

The BJP and the Congress contested on all 68 constituencies.

AAP, whose campaign had tapered after the initial phase, bagged 1.10 per cent of votes. The CPI (M), which fought on eleven seats, also did not win any seat and its sitting MLA from Theog lost. It got 0.66 percent of votes, Independents and others got 10.39 percent while 0.59 percent of votes went to NOTA.

Outgoing Chief Minister Jai Ram Thakur said on many seats the victory margin was narrow. He said on nearly eleven to twelve seats, the winning margin was below 1,000 votes.

The lowest margin of 60 votes was registered by Suresh Kumar of Congress from Bhoranj seat.

Thakur defeated his nearest Congress rival Chet Ram by 38,183 votes from the former’s Seraj seat in Mandi district. It was the highest victory margin in these elections.

“If you also see vote share, the difference (between Congress and BJP) is just about 1 per cent. Despite that, Congress registered a win on many seats... But we respect the mandate,” Thakur said before resigning.

“We will give constructive support rising above partisan politics but where we feel interests of the state are not being protected, we will raise the issues before people,” he said and expressed the hope that the new Congress government will fulfil its election promises.

While the BJP was celebrating its stupendous victory in Gujarat, Prime Minister Modi also thanked the voters of the hill state for their affection and support to the party and said it will keep working to fulfil the aspirations of the state and raise people’s issues.

Hoshiyar Singh from Dehra and K L Thakur from Nalagarh are among the three Independents who won.

Of the 24 women who were in the fray, only BJP’s Reena Kashyap won from Pachhad reserved seat.

The counting of votes for the 68-member assembly began at 8 am. For the Congress, a victory in Himachal Pradesh was needed for a revival as it has been battered by a spate of electoral losses in the last few years.

AICC in charge of Himachal Pradesh Rajeev Shukla said the party was happy that it is getting an opportunity to form the government in the state and asserted that it will do everything to fulfil the 10 guarantees made to the people of the state and would provide better governance to people.

He said Rahul Gandhi’s Bharat Jodo Yatra had also had an indirect impact on the elections and among the people.

While Shukla is AICC in charge of Himachal Pradesh, Chhattisgarh Chief Minister Bhupesh Baghel was appointed senior observer for the polls.

The main opposition party had raised issues of price rise, unemployment, and the old pension scheme, among others.

The BJP’s campaign in Himachal saw a special focus on women and youth, with the party rolling out a standalone manifesto for women for the first time in the state’s history. PTI

Himachal Pradesh minister Sarveen Chaudhary lost from the Shahpur seat in Kangra. She was defeated by Congress candidate Kewal Singh Pathania by a margin of 12,243 votes. The BJP had brought Vijay Singh Mankotia into the fold to brighten Chaudhary's winning prospects, but anti-incumbency still took a toll on the party.

Lokender Kumar of BJP has won from Ani seat in Kullu district by a margin of 6778 votes.

Singh, an Independent MLA, had joined the BJP just before the November 12 assembly polls in the state, but he was denied the ticket.

Dalip Thakur of BJP won by a margin of 1807 votes from Sarkaghat seat.

Deep Raj of BJP declared winner by a margin of 10534 votes from Karsog seat in Mandi.

BJP candidate Ranbir Singh defeated Congress' Ajay Mahajan by a margin of 18,752 votes to win the Nurpur seat, according to the Election Commission.

The contest for Nurpur was keenly watched as Minister Rakesh Pathania, who has won three times from the seat, was shifted to Fatehpur as the BJP candidate.

Former Union minister late Sukh Ram's son Anil Sharma retained the Mandi Sadar seat for the BJP by defeating his nearest Congress rival. Sharma beat Champa Thakur by a margin of more than 10,000 votes, according to the Election Commission.

BJP candidate and sitting minister Sukh Ram Chaudhary has retained the Poanta Sahib Assembly seat in Sirmaur by defeating his Congress rival. He defeated Congress candidate Kirnesh Jung by a margin of 8,596 votes. There were nine candidates in the fray from this seat.

Congress candidate Neeraj Nayar has won from the Chamba seat by defeating his BJP rival, according to the Election Commission. He defeated Neelam Nayar of the BJP by a margin of 7,782 votes.

Chief Minister Jai Ram Thakur wins by a record margin of over 37,000 votes.  This is the highest ever winning margin by any CM in Himachal.   Besides this BJP is leading in nine of the 10 segments on CM’s home turf of Mandi.  In the last assembly polls in 2017, BJP had won nine seats.

Cong dominating district Shimla, ahead in 7 out of eight constituencies. BJP ahead in Chopal alone

Six-time Congress MLA Asha Kumari is trailing in Himachal Pradesh's Dalhousie assembly seat with BJP candidate D S Thakur in the lead with a margin of by 7,191 votes, according to the Election Commission.

The erstwhile member of the Koti royal family, Singh was ahead with a margin of 7,596 votes in the seat which has an urban-rural mix.

The stakes are high for Rathore who is contesting for the first time.

It was during his tenure as state Congress chief that the party won by-elections to the Mandi Lok Sabha seat and three assembly seats last year.

Moving quickly to manage the fast evolving Himachal situation where the main parties are locked in a tight contest, the BJP on Thursday morning deputed national general secretary Vinod Tawde to Shimla to watch the developments and lead parleys with rebels.

Party sources said Tawde would engage the four BJP rebels who are leading in early trends.

These include KL Thakur in Nalagarh and Hoshiar Singh in Dehra.

“Four rebels who are winning are from the BJP,” said a party source as the ruling BJP seeks to change the anti incumbency trend of 37 years in the state.

Meanwhile Avinash Rai Khanna, BJP state in charge is also expected to be in Shimla soon until the situation becomes clear.

Four Independents (3 BJP and 1 Congress rebel) ahead in Himachal

Congress leading in Solan, Kasauli, Doon and Arki while an Independent in Nalagarh after 2nd round in Solan district.

In Paonta Sahib, BJP's Sukh Ram leading with 3,561 votes after 3rd round

In Sirmaur district, Congress is leading in Shillai and Nahan by thin margins while BJP ahead in Pacchad, Sri Renuka Ji and Paonta Sahib After third round in Shillai

BJP's BaldevTomar leads for the first time by 1,326 votes

In Kullu district, in Kullu and Manali Congress is leading, while in Ani BJP is leading and in Banjar independent candidate Hiteshwar Singh is leading.

AAP is not leading even in one seat out of 62 seats for which trends have been released. 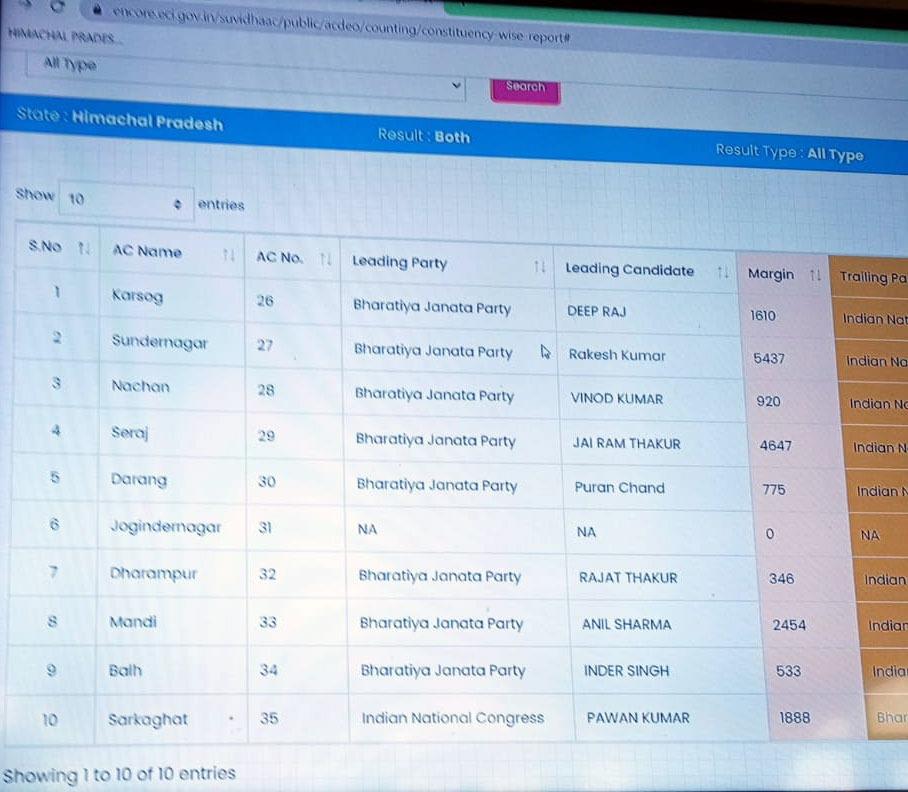 Ram Lal Markanda of BJP is leading in Lahaul and Spiti of 1,251 votes

Sudhir Sharma of Congress leads by 1,300 votes from Dharamsala after first round

Deep Raj of BJP from Karsog is leading of 1,056 votes.

Rajat Thakur of BJP from Dharampur is leading of 346 votes

BJP's Sukhram Chawdhary leads after first round with 5,157 votes

Anil Sharma of BJP leading from Mandi Sadar with 1 vote.

Pawan Thakur of Congress is leading from Sarkaghat 1,204 votes

The initial trends show that Congress is leading in 28 segments and BJP in 23 and independents in four constituencies. The counting has started with the postal ballots. CM Jai Ram Thakur is leading in his segment of Seraj in Mandi district.

The results of the high-stakes elections will also reveal whether the BJP's all-out personalised campaign led by Prime Minister Narendra Modi to buck the 'alternative government' trend has worked or not.

For the opposition Congress, however, a victory in Himachal is much-needed for its revival, as it has seen a spate of electoral losses in the last few years.

Counting will start with the postal ballot at 8 am followed by EVM counting at 8.30 am