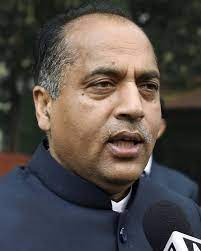 The state government will sympathetically consider the implementation of the recommendations of the Sixth Pay Commission for the employees of the Himachal Pradesh Tourism Development Corporation (HPTDC). The issue will be taken up in the meeting of the Board of Directors (BoD), said Chief Minister Jai Ram Thakur while presiding over the 50th Foundation Day function of the HPTDC here today.

He said the corporation that started in 1972 with 11 hotels and around 165 employees has 54 hotels and about 2,000 employees today.

He said that to improve accessibility in the state, five heliports had been constructed at Shimla, Baddi, Rampur, Mandi and Manali. He added that heli-taxi services had been started from Chandigarh to Shimla and Shimla to Rampur-Mandi-Dharamsala and the detailed project report of a new airport at Mandi was in its final stage.

Thakur said that various projects such as the Art and Culture Centre at Bhalie, Artificial Climbing wall at Manali, Village Hatt at Kangra, heliport in Shimla, beautification of the Hatkoti Temple had been executed under the Swadesh Darshan scheme and the Convention Centre at Kiarighat and the Paragliding Centre at Bir-Billing were nearing completion.

He said that the corporation had earned a profit of Rs 11.84 crore during April, May and June this year. “The HPTDC must work with new zeal and professionalism to become a profit-making organisation,” he added.

Amit Kashyap, Director Tourism and Managing Director of HPTDC, said that the corporation had acted as a catalyst, trendsetter and a prime mover for the promotion of domestic and foreign tourism in Himachal Pradesh. President of the HPTDC Employees Federation Dhabe Ram Chauhan urged the Chief Minister to sympathetically consider their genuine demands.

The HPTDC has earned a profit of Rs 11.84 crore during April, May and June this year. It must work with new zeal and professionalism to become a profit-making organisation. The employees of the tourism corporation must regularly upgrade their skills and provide professional services to guests. — Jai Ram Thakur, Chief Minister