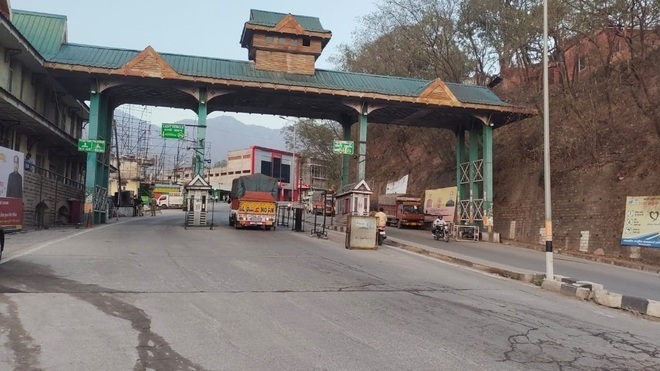 The inter-state barrier at Parwanoo, which falls in the disputed zone.

An inter-state dispute between Himachal and Haryana where a Survey of India report had claimed that Himachal Pradesh had encroached upon some land belonging to the neighbouring state at Parwanoo, is awaiting resolution for the last about a year.

In a bid to settle this pending boundary dispute pertaining to the state’s gateway at Parwanoo, a joint spot inspection was conducted by the officials of the revenue and forest departments and the report was sent to the state government earlier this year.

As per this report, an examination of the revenue records of 1908-09 had revealed that the dividing line between Haryana and Himachal Pradesh has been shown in the shape of a nullah in khasra number 332. This line divides Mouja Gumma of Himachal and Khera Sita Ram of Haryana and it has been entered in equal share of both states.

The report had further pointed out that the proposed dividing line drawn by the Survey of India and reflecting pillars 11, 12, 13 and 14 in the illegal possession of Himachal Pradesh is not correct as per the revenue records of both the states. These pillars exist in R-56 area, which is reserve forest number 56 of Parwanoo Forest Range and it is hence not accepted by the state.

Officials observed that R-56 was measured during the forest settlement of 1937-38, when none of the states was in existence. Hence the issue of encroachment on the boundaries of Haryana was not applicable. The notification dated December 24, 1952, by the then Pepsu government and published on January 4, 1953, notifies that the diving line between the two states is Taksal Nallah Bridge and Kalka Shimla Road and pillar number 13 is a boundary to mark existing in the nallah.

Thus, the proposal of the Survey of India regarding the ridges being the diving line between the two states is incorrect keeping in view the field position, points the report accessed by The Tribune.

The issue is before the Ministry of Home Affairs which is examining its various aspects. Since a Survey of India report had shown some parts of the bordering areas in Haryana, a fresh survey was got re-done on the basis of available record. Its report was sent to the government of Himachal Pradesh along with relevant documents like the survey sheets for further action which was awaited.

Sub Divisional Magistrate, Kasauli, Sanjeev Dhiman, when quizzed said, “No information has been received about this issue from the union government after relevant information was sent to them from the state government. The issue has also figured at the inter-state meetings with Haryana.”