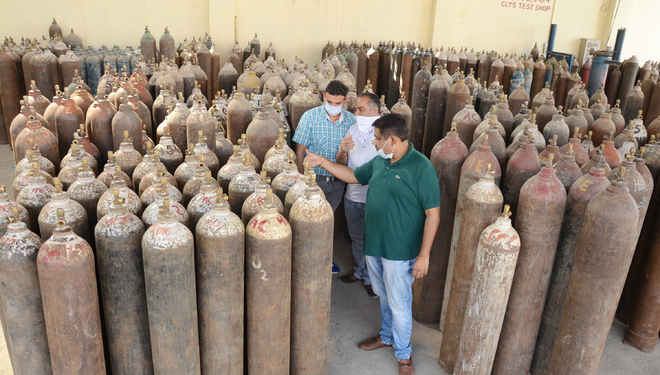 The district administration has told all private hospitals, traders and individuals to declare the number of oxygen cylinders in their possession within the next 24 hours, failing which action would be taken against them. - File photo

The district administration has told all private hospitals, traders and individuals to declare the number of oxygen cylinders in their possession within the next 24 hours, failing which action would be taken against them.

The deputy commissioner today directed all sub-divisional magistrates to confiscate undeclared as well as unutilised cylinders. While the oxygen supply situation in the state is comfortable at the moment, a shortage of cylinders is being felt.

The state has sought 5,000 cylinders from the Centre. The order states many people and entities may have hoarded cylinders. In case of emergency, officials have been empowered to seize cylinders available with anyone. A similar order was issued by the Solan administration.

Babu Lal Sharma, SDM, Rohru, said: “Oxygen cylinders have suddenly disappeared from the market. It is possible that people might have hoarded these.”

The oxygen plant at Deen Dayal Upadhyay Hospital, Shimla, has become functional. It has the capacity to produce 300 litre oxygen per minute or 4.32 lakh litres per day.