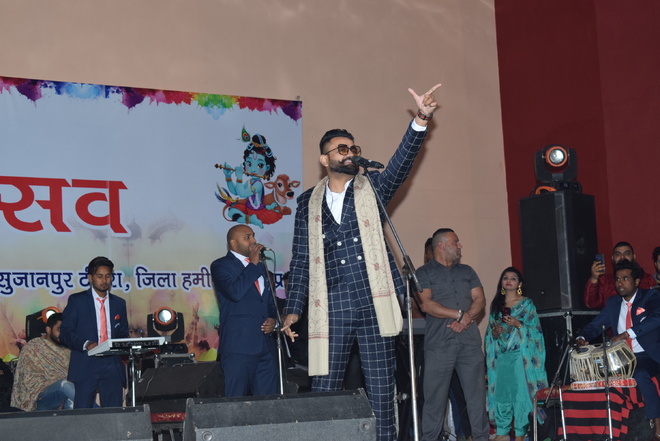 Singers Amrit Mann and Sanchita Bhattyacharya performed at the first cultural night of Holi Utsav in Sujanpur on Saturday.

The two-day Holi festivities began here today with people celebrating ‘chhoti holi’ with fervour. In Kullu, the first day of holi is called Chhoti Holi and second day is known as Badi Holi. While Holi will be celebrated on March 10 in most of the other regions, the festival is celebrated a day before here, depending upon the full moon night.

People participated in processions at Akhara Bazar, Sultanpur, Dhalpur and Sarwari and sang traditional holi songs with the backdrop of local ‘baaja’ (orchestra) and played with colours. Many rituals and customs are linked to this colourful event here. The Mahants, a community who came here along with the idols of Lord Rama and Sita from Ayodhya in the mid 17th century, play Holi with the chief deity of Kullu Lord Raghunath and the decendents of the erstwhile rulers of Kullu. They take out a processions at various places and sing Holi songs. The festival starts after Basant Panchami here which was held on January 30 this year.

Badi Holi will be celebrated tomorrow in which people play Holi during the day and “Phaag” is burnt in the evening at the erstwhile ruler’s palace at Raghunathpur. The chief deity of Kullu Lord Raghunath is brought in a colourful palanquin and a heap of wood and grass, having a long mast with a flag in the center of the pyre, is put on fire to symbolise the ‘Holika Dahan’.

Parmar said every family had benefitted from the visionary policies and programmes of the BJP government in the state during the last two years. He wished people a joyous Holi and released the souvenir brought out by the organisers of the Holi Mahotsav.

The historical Sujanpur Holi festival was the initiative of Raja Sansar Chand, the erstwhile king of Sujanpur estate who started the tradition of celebrating the festival of colours with public. Thakur also inaugurated exhibition stalls of various departments representing their achievements and development programmes.