Delhi tourists dance to loud music inside Atal Tunnel, cause a traffic jam 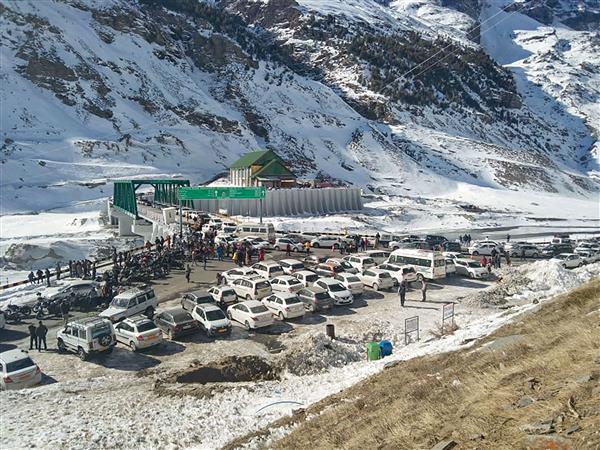 Locals in Himachal Pradesh on Sunday blamed the sudden spike in tourists, largely unregulated and drunken hooligans, in this tourist resort known for snowy landscapes and majestic mountains, for the chaos and the mess.

They say many visitors are not wearing face masks and practising social distancing and are enduring the worst of the tourist hordes after a gap of Covid-induced lockdowns.

A recent case of hooliganism came to light last week when a group of youngsters from Delhi stopped their three vehicles midway in the newly-opened Atal Tunnel, a new tourist attraction where parking a vehicle is an offence, and started clicking pictures, recording videos and dancing. This led to obstruction of traffic inside the tunnel.

"Tourism provides an incredible economic boost, sure, but the class of people that come have to behave in a sustainable and responsible manner," remarked octogenarian local resident Devi Chand Thakur.

"People with no tourist sense are coming here, and they are bringing problems for the locals." Another resident Kavita Thakur blamed the rise in drunken hooligans especially during the night. "You can see tourists dancing and consuming liquor at public places. It becomes really difficult for us to go alone to the market these days."

Police claimed that they have doubled their men patrolling outside clubs and bars and ensuring parking of tourist vehicles at the designated places.

Seven tourists, mostly in their twenties and thirties, have been detained for dancing inside the tunnel under several sections of the Indian Penal Code. They have also been charged with spreading infection.

The 9.2-km horseshoe-shaped single-tube, two-lane Atal Tunnel, which has shortened the distance between Manali and Keylong, the headquarters of Lahaul-Spiti, by 46 kms, reducing the travel time by nearly three hours, was inaugurated by Prime Minister Narendra Modi on October 3.

The tunnel has also ensured all-weather connectivity to the landlocked Lahaul Valley.

Before the tunnel construction, the Rohtang Pass was the only gateway between Lahaul and Manali. The pass normally remained closed for five months every winter owing to heavy snowfall.

Travel agents here told IANS a large chunk of tourists bounds for Manali prefer a visit to villages located in Lahaul with the opening of the Atal Tunnel.

"Every day around 1,500 tourist vehicles are travelling towards Lahaul via the Atal Tunnel to enjoy snowy landscapes there," explained a travel agent.

Suman Thakur, the panchayat head of Sissu in Lahaul-Spiti district, said the region has seen a sudden influx of tourists with the opening of the tunnel.

"Since there is no adequate arrangement to handle garbage in plenty, huge trash left behind by the tourists has started creating problems now." After heavy snow cover on roads, the local administration is not allowing the tourists coming from Manali to travel beyond Sissu, some 3 km from the north portal of the Atal Tunnel.

A day after Modi inaugurated the tunnel, three accidents were reported with motorists driving recklessly while taking selfies.

The Border Roads Organisation (BRO), a wing of the Defence Ministry that excavated the tunnel at an altitude of 3,000 metres with sheer hard work and determination in a decade, had blamed the local authorities for not deploying the police to monitor the movement of motorists.

However, with the raising of serious objections by the BRO, the state government has now deployed the police.