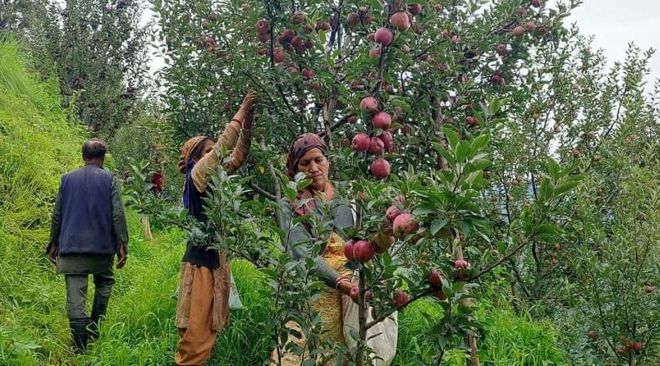 Following the state government decision to bear the increased six per cent GST on cartons, the Horticulture Produce Marketing and Processing Corporation (HPMC) has drafted a proposal to buy nearly 50 lakh cartons this season.

“We have sent a proposal to the government to buy around 50 lakh cartons so that maximum growers can avail of the GST discount being offered by the government. The Cabinet will take the final decision on it,” said HPMC General Manager Hitesh Azad.

We have sent a proposal to the government so that maximum growers can avail of the GST discount being offered by the government. The Cabinet will take the final decision on it. —Hitesh Azad, HPMC General Manager

With the cost of the cartons going up due to increase in the GST rate from 12 to 18 per cent and the subsequent protest by growers, the government discussed the issue in the last Cabinet meeting and decided to bear the enhanced GST on cartons sold through HPMC outlets.

As the HPMC sells only a minuscule chunk (not even one per cent) of the total cartons sold during the season, the GST rebate on such limited number of cartons would not have made much of a difference. “We generally sell around 2 to 2.5 lakh cartons during the season. We have planned to buy around 50 lakh cartons this time to offer the GST rebate to maximum growers,” said Azad. The HPMC has already chosen three companies to supply cartons on the basis of L1 bidding.

Apple growers, however, are not impressed, and feel it’s merely a gimmick. “How many growers buy cartons from HPMC? Mostly it’s the growers who have their MIS payment stuck with the agency,” said Lokender Bisht, president of the Progressive Growers Association. “The HPMC sells cartons at a price higher than the market price. Even after six per cent GST rebate, it will cost nearly as much as in the open market. So why would a grower buy cartons from the HPMC?” asked Bisht.

Harish Chauhan, convener of the Sanyukt Kisan Manch, said the whole thing was a mere eyewash to distract apple growers. “Has the HPMC ever sold more than two lakh cartons? How will it sell 50 lakh cartons this year?” asked Chauhan. If the government wants to provide relief to growers, it needs to come up with a good plan and not some knee jerk reactions,” he said. Besides, the apple season is already underway and most of the growers have already made arrangements for procuring packaging material. “By the time the HPMC and the government take a final decision, the season will be pretty much over,” said Chauhan.