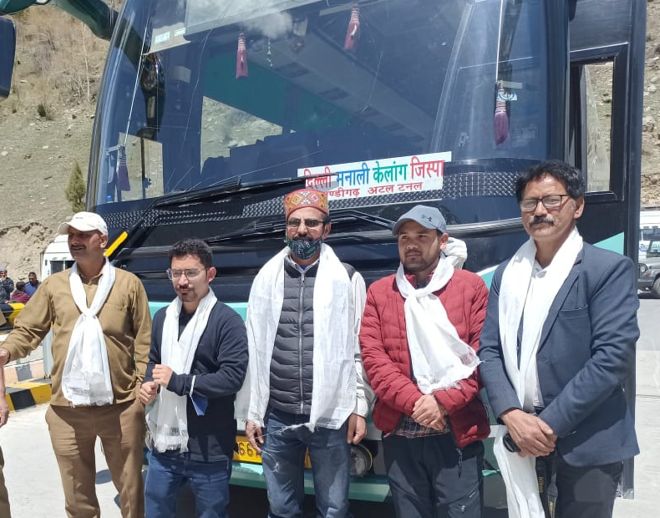 The HRTC staff during a trial of Volvo bus on Monday. Tribune photo

The Himachal Road Transport Corporation (HRTC) will start a direct Volvo bus service on the Lahaul-Delhi route from April 20. The bus will start from Jispa and go up to Delhi.

The HRTC at Keylong Depot conducted a trial today on this route via Atal Tunnel. A 39-seater bus plied to Manali from Lahaul successfully.

After the opening of the tunnel, the tourist influx to Lahaul valley has increased considerably. The move to introduce Volvo bus is aimed at providing better transportation facility to tourists visiting Lahaul from Delhi and Chandigarh.

17 hours the bus will take to complete the journey

Mangal Manepa, regional Manager of the HRTC Depot at Keylong, said: “We are going to start Volvo bus service between Lahaul and Delhi from April 20.”

“We have conducted a successful trial on this route. The fare from Delhi to Jispa will be Rs 2,038 per passenger. It is a 684-km long route and the bus will take almost 17 hours to complete the journey. The timing of the bus will be shared soon,” he added.

It was for the first time that HRTC will start Volvo bus service to the commuters from Lahaul to Delhi. Earlier, the HRTC was providing ordinary bus service on the route from Keylong Depot.