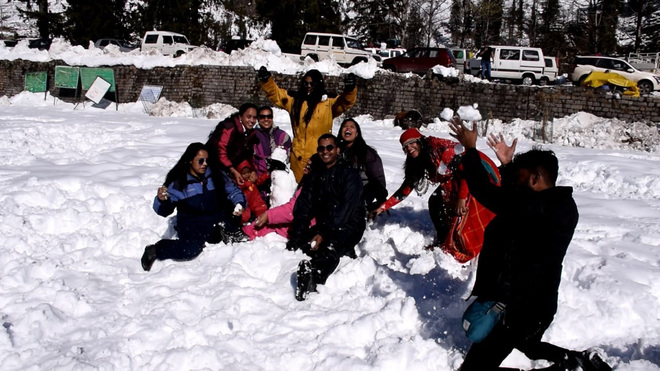 As the Manali-Solang valley road has been restored to traffic, a large number of tourists thronged here to enjoy snow activities today. The valley, just 8 km ahead from Manali towards the Atal Tunnel, is a key tourist destination in Kullu district, where people can enjoy skiing, paragliding, horse riding and other activities.

At Himachal weddings, mask norm given a miss

Paragliding and skiing service providers are elated as the tourist influx to the valley has increased after the snowfall. They are expecting good business in the coming days.

Rajesh Agarwal and his wife Puja , who are from Delhi, said, “It was an amazing experience to enjoy paragliding and skiing activities in the Solang valley. We were keen to visit the Atal Tunnel, but could not do so due to restrictions imposed by the Kullu district administration.”

Majority of tourists visiting Manali said the state government should equip Kullu-Manali with better health facilities in the wake of the pandemic to provide better medical care to the tourists visiting the area.

The Kullu district administration has restricted movement of tourists towards the Atal Tunnel beyond the Solang valley for the next few days, in the view of public safety. The road is unfit for the movement of vehicles towards the tunnel from the Solang valley because at shadow places there is considerable snow deposited in the area, which makes journey on this route risky.