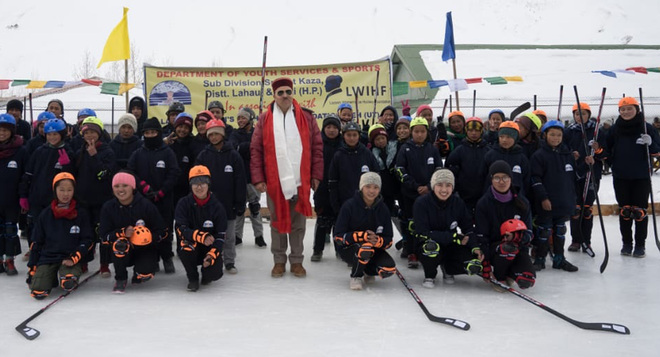 A 10-day ice hockey training camp began at Kaza in tribal district Lahaul Spiti today. The camp was inaugurated by Agriculture Minister Ram Lal Markanda. This is for the first time that such a training camp is being organized at Kaza to impart training to school students as well as physical education teachers about ice hockey.

Speaking on the occasion, the agriculture minister said that winter sports would be developed in the tribal district of Lahaul Spiti due to suitable environment here. As the district receives considerable snowfall every year, winter sports could be promoted in the region.

The first ice hockey skating rink in Himachal Pradesh has been developed at such a high altitude – an elevation of 3,720 m — in Spiti valley in this tribal district.

As many as 45 students of Lahaul-Spiti will take training on ice hockey during the 10-day camp. The event is being organized by the Youth Services and Sports Department, Kaza, in collaboration with Ladakh Women Ice Hockey Foundation.

The minister stated that Spiti valley had vast potential for the promotion of winter sports like ice hockey and skiing and the state government would make efforts to promote winter sports here.

The Spiti valley in itself is a tourist place because of its panoramic view and attracts a large number of tourists here round the year. The minister announced Rs 15 lakh for promotion of ice hockey and Rs 15 lakh for development of skiing in the region.

He said that apart from these attractions, the tourists visit here to have a glimpse of snow leopard.

“I urge the Ladakh Women Ice Hockey Foundation to impart training in ice hockey to the students of the Spiti valley so that they are able to represent the state at national and international levels in near future. After completion of this camp, these students will be sent to Ladakh for advanced coaching and the expenditure will be borne by the state government”, he added.

The minister stated that the state government was committed to promote sports in Himachal and efforts were being made in this direction.

He appreciated the local administration for using jute bags for collection of garbage.