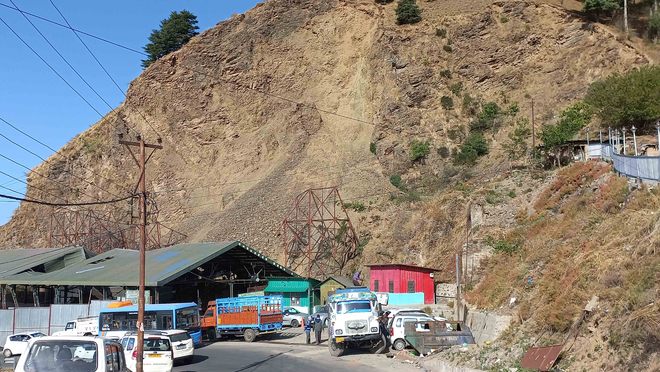 The fruit mandi at Bhattakufer in Shimla, which has been shut since last year following a landslide. Photo: Amit Kanwar

The fate of the Bhattakufer fruit mandi on the outskirts of Shimla on the Shogi-Dhalli bypass hangs in balance. An IIT Roorkee team has been invited to check whether it’s safe to run the marketing yard that’s located in front of a hillock prone to landslides.

“The team will be here in a couple of days for the survey. Whether or not the mandi reopens will depend on the report of the team,” said State Agricultural Marketing Board Managing Director Naresh Thakur.

The mandi had to be shut down July last following a landslide of the hill overlooking the yard. While growers and traders escaped, several boxes were crushed under the debris. The administration had declared the yard unsafe and it was shut down.

If the team declares the site unsafe, traders feel it will have a massive ramification. “One, it’s the biggest stone fruit market in the state. Around 70 per cent stone fruit is marketed here. Growers from Mandi and Kullu also market their produce here,” said NS Chaudhary, president of the State Arhtiyas Association and the founder member of the Bhattakufer market.

“Also, it’s one of the biggest apple markets. During the peak season, around 40,000 to 50,000 boxes are marketed here. So, many people will be affected, if this fruit market is not re-opened,” said Chaudhary.

Also, he said, around 50 traders had been running their business for many years now. “It will hurt their business too. Considering that the market caters to the interests of so many people involved in the business, the government should make every possible effort to restart it,” said Chaudhary.

The marketing board, on the other hand, is banking on mandis it has opened in the hinterland if the IIT team gives an adverse report for the Bhattakufer market. “While we have opened quite a few mandis in recent years, work is in progress at a few others like Shilaroo market. We will ensure growers face no problem in marketing their produce,” said Thakur.