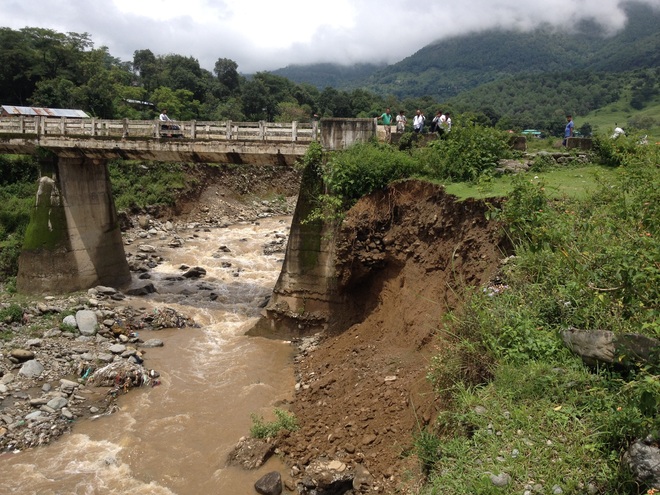 Widespread damage has been caused to bridge.

A Rs 1-crore bridge on the Sukhar Khud on the Chauntra Dohg-Joginder Nagar road (Bhadhiyara panchayat) in Mandi district, which was constructed four years ago, is on the verge of collapse because of illegal mining in the riverbed.

The large-scale unscientific mining has posed a threat to the bridge. The gushing water has eroded the foundation of the bridge and washed away its protection walls.

The Tribune team visited the area and was told by villagers that large-scale illegal mining had been going on in the Sukhar Khud for the past two years.

Neel Kumar, panchayat member, said despite complaints to the local authorities, including the PWD, mining and police departments, no one had bothered to initiate action against the mining mafia. They alleged that state agencies had virtually surrendered before the mining mafia. Dozens of tractor-trailers, trucks and hundreds of mules can be seen in the riverbed daily, extracting sand, stone, gravel and other mining material. The mining mafia has dug deep trenches near the foundation pillars of the bridges which had weakened the foundation of the bridge and endangered its existence.

Villagers said the first signs of damage were seen a fortnight ago when the land on the left side of the bridge gave way. Soon, a major portion of the protection wall of abutment was also washed away. The gushing river eroded the inside portion of the embankment too. Besides, land erosion near the bridge also posed a threat to the school buildings. Villagers demanded construction of a retaining wall to protect the schools.

This has put officials of the state PWD on their toes. They made efforts to prevent further damage to the bridge but because of the heavy flow of water, nothing could be done to protect the pillar of the bridge.

BM Thakur, Executive Engineer, PWD, Jogindernagar, said he a detailed project report for the bridge’s repair was being made, which would be sent to the government to seek funds. Mandi DC said he had already released Rs 1 lakh for the construction of a protection wall of the bridge.