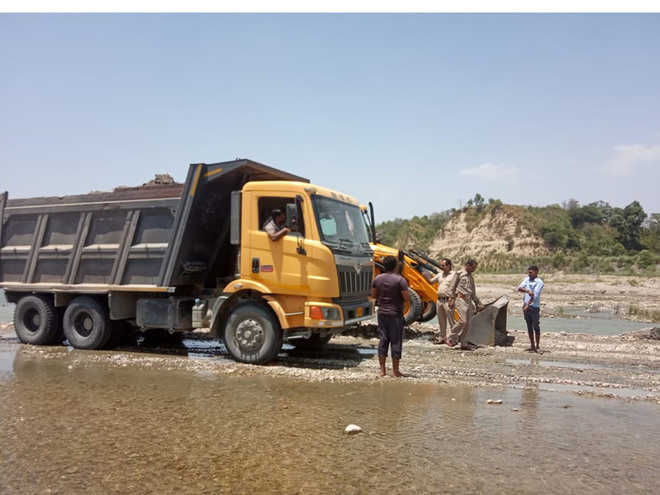 Illegal mining on banks of the Swan in Una. Tribune file photo

The National Green Tribunal (NGT) has constituted an independent five-member committee headed by a former judge of Punjab and Haryana High Court, Justice Jasbir Singh, to give an independent report regarding alleged illegal mining at Swan river in Himachal Pradesh’s Una district.

The NGT’s three-member principal bench headed by its chairperson Justice Adarsh Kumar Goel and members Justice Sheo Kumar Singh and Dr. Nagin Nanda issued the order on March two for setting up the five-member committee while hearing an application filed by one Amandeep.

In his application filed on February 20, the applicant alleged that the sand mafia having political shelter under the garb of a mining licence, are lifting sand and other material from the bed of the Swan river in an unscientific manner by using excavators, in utter violation of the norms and rules framed for the purpose under the nose and eyes of the local district administration and government, causing constant danger to the river and its channelisation.

The application further stated that the overloaded trucks-tippers carrying sand are damaging roads, polluting air, and causing inconvenience to the public.

There is every possibility that the illegal mining may not only cause loss, damage and destruction to the channelisation work of the Swan river but also damage the bridges, leading to loss of public funds already spent for this purpose.

Besides, it may cause loss to the water-level and pose a threat to the pollution-free atmosphere of Himachal Pradesh, it added.

Meanwhile, adjourning the hearing for May 10, the NGT stated that the committee may visit the site and give an independent report of facts found and remedial action required.

In its four-page order, the NGT directed the state Pollution Control Board (PCB) and Una district magistrate to provide logistic support to the committee.

The committee will be at liberty to take assistance from such other institutions, experts or individuals as necessary, the order added.

Apart from constituting the five-member committee, the NGT also directed the state environment secretary, the state PCB and Una district magistrate to take remedial action to control the menace of sand mining after verifying the facts stated in the application.

The PCB will be the nodal agency for compliance and coordination, it added. PTI