The Congress beat the BJP in Shanta Kumar’s home town of Palampur by winning 11 of the 15 wards in the municipal corporation elections today. The BJP could win only two wards while two Independent candidates emerged victorious in Palampur Khas and Brindaban wards.

The Congress’ victory in Palampur is being seen as a major embarrassment to the ruling party. Industry Minister Bikram Singh and Trilok Kapoor spearheaded the BJP campaign here.

CLP leader Mukesh Agnihotri, Asha Kumari, Ram Lal Thakur and Ajay Mahajan worked hard to ensure the victory, but it is the goodwill and reputation of the Butail family, including former Speaker BBL Butail and his son and local MLA Ashish Butail, which gave the party a clear edge over the BJP. Shanta Kumar did not campaign for the party candidates. 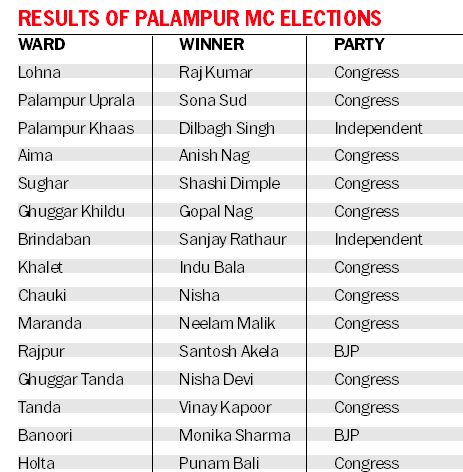