Jawali villagers object to wall being built by Railways : The Tribune India

Jawali villagers object to wall being built by Railways 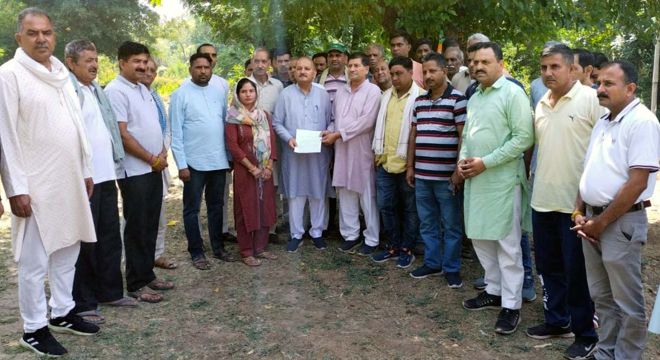 Residents of Harsar and Palanth gram panchayats in Jawali subdivision of Kangra district are objecting to the boundary wall being constructed by the Railways near the Harsar-Dehri railway station, which will block the pedestrian path to their villages. The ongoing construction work has also created resentment among shopkeepers of the adjoining market, as it will also block their shops.

The irate villagers, led by Mamta Devi, pradhan of Harsar gram panchayat, and social activist Kamal Kumar yesterday met local MLA Arjun Thakur and appealed to him to get the ongoing construction of the boundary wall stopped.

Earlier, the villagers had submitted a memorandum to Indu Goswami, Rajya Sabha member, and Kishan Kapoor, Lok Sabha MP from Kangra. They also gave a copy of the written agreement between the Railways authorities and locals signed on October 31,1992, in the presence of the then Kangra Lok Sabha MP DD Khanuria in which the Railways Department had agreed not to construct the boundary wall.

The villagers lamented that the Railways, which had a written agreement with locals for not constructing the boundary wall, had backed out of its commitment (Copy of the agreement is with The Tribune). They said that if the wall was constructed, the affected shopkeepers would lose their livelihood and rural people would lose connectivity to the pedestrian path.

They said that the people of the area were using the pedestrian path for the past over five decades and its sudden closure would cause inconvenience to them.

Meanwhile, the MLA said that he had already taken up the issue with the MPs and would also meet them to get the issue resolved.