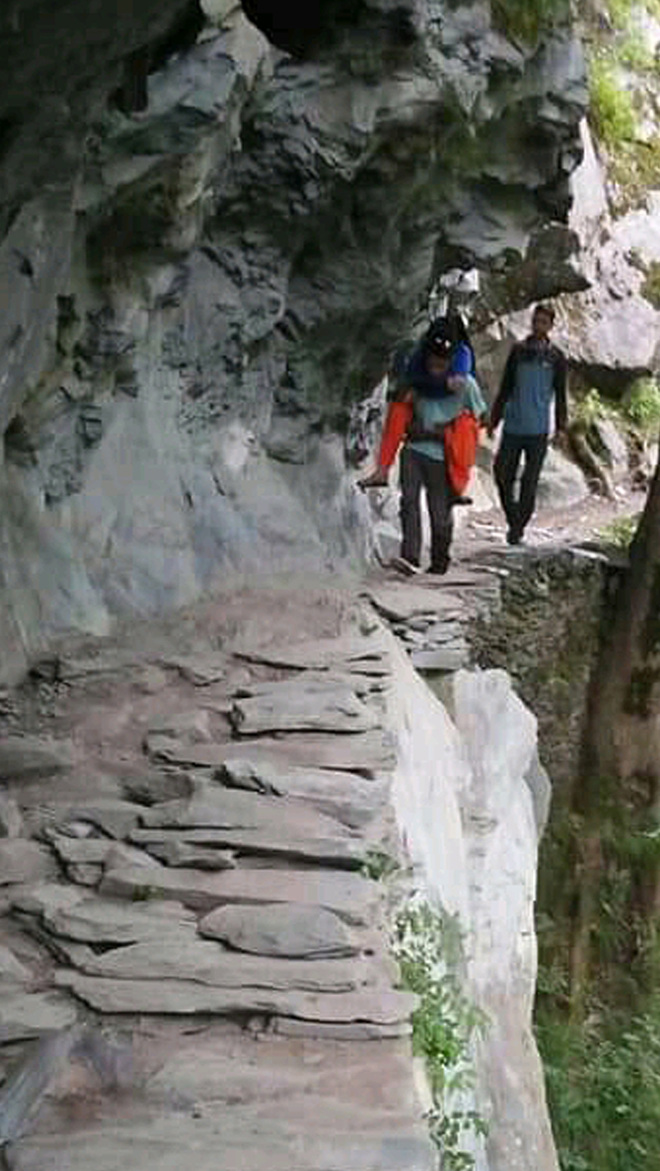 A man carries an ailing woman on his back in Kawarasi area of Chamba district. Tribune photo

The state has received several awards for its healthcare system. However, in remote Chamba district, the most backward area of the state, people are still bereft of even the basic facilities such as road connectivity and primary healthcare.

No permanent staff at health centre

Notwithstanding the tall claims of the government of providing the best healthcare facilities to the people of the state, residents of Kowrasi village were recently forced to carry an ailing woman on their backs for 6 km to provide her primary treatment.

Kowrasi village having a population of 2,100 is located in the tribal Bharmour area of Chamba district. On July 3, a woman fell sick and she required emergency medical care. Though a primary health centre is situated in the village, it does not have permanent staff. The kin of the woman had to carry her on their backs for 6 km to reach the nearest motorable road and then to the Holi Community Health Centre. It took them four hours before she could be given medical care. The photos of the incident have also gone viral on social media, inviting the ire of netizens.

Surjeet Kumar, a local leader, alleged that a huge amount was spent in the Bharmour and Pangi areas of Chamba district every year in the name of tribal development. However, the ground reality presented a different picture. Residents were forced to travel to Chamba for emergency treatment and many lives were lost in transit, he said.

Dr Rajesh Guleri, CMO, Chamba, said he had sought a report from the Block Medical Officer (BMO) after the photos of people carrying an ailing woman on their backs went viral.

As per the reports, there is only one woman health worker at the Kowarsi heath sub-centre. She has also been given the additional charge of the nearby health sub-centre at Dhali. The distance between both centres is 20 km, and it takes her five hours to cover it The health centre at the village is not the round-the-clock facility and provides only preventive and primitive care and basic curative services. As per the report of the BMO, the patient was taken to the centre late in the evening and it was closed. No emergency services were provided at the centre after 4 pm, the CMO said.