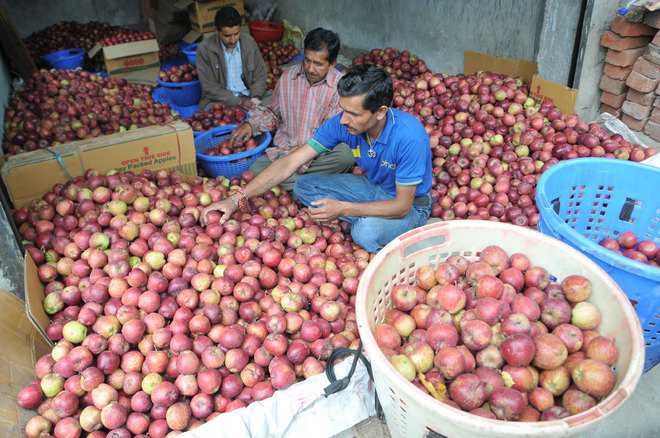 Apart from fruit plucking, its transportation and marketing is also a challenge in the hill state where the apple harvesting lasts till the end of October.

This time a majority of labourers are giving the orchards a miss owing to the coronavirus pandemic as the harvesting of apples is going to gain momentum by mid of July.

Apple growers told IANS that their business, which alone constitutes 89 per cent of the total fruit economy, is not as fruitful this time as the Nepalese labourers, the backbone of Himachal's apple industry for more than six decades, have not returned to the state after their winter vacation owing to the pandemic scare.

They stare at huge losses owing to transport and market related problems at the peak season for harvesting their crop.

This time there is double whammy for the growers, said Naresh Sharma, an apple grower from Dhano village at Theog tehsil in Shimla district.

"The apple crop is quite less than its normal yield this season largely due to unfavourable weather. The shortage of labourers has added to our woes," he told IANS.

Prominent apple grower Sharma said normally the labourers returned to their hometowns in November and start returning to Himachal Pradesh in March-April.

"This time they have not been able to return so far. The acute scarcity of labourer is posing a serious challenge to apple harvesting," a worried Sharma said.

Apart from fruit plucking, its transportation and marketing is also a challenge in the hill state where the apple harvesting lasts till the end of October.

Added labour contractor Satish Begta, "Besides the threat of getting infected by the virus, the fear of getting quarantined is discouraging a majority of the labourers to return to the state from Nepal." He said the state government should make provisions for their board and lodging in quarantine centres.

Another contractor said fuelled by rumours that they might die of hunger as they will not be able to earn during quarantine, the labourers are not keen to return to work till the pandemic normalises.

"The government has to build a large number of relief camps for the migrant workers with arrangements to provide food and necessary facilities. A portal must be created for the labourers to get themselves registered with the government ensuring all possible help," he added.

Himachal Pradesh is one of India's major apple producing regions, with more than 90 per cent of the produce going to the domestic market.

Chief Minister Jai Ram Thakur said the government is in touch with labour contractors to ensure return of the labourers.

"Many of them had returned to Nepal, but still some of them are here. Even labourers from Uttar Pradesh are coming here. We will ensure the labour is available during the apple season," he told the media in Shimla on Friday.

But anxious apple growers say the government has to ensure the return of labourers mainly from Nepal by mid of June so that they timely fulfill the medical protocols like mandatory quarantine timeframe.

As per the state Horticulture Department's estimates, this season the apple production in the state is 25-30 per cent less than last year's record harvest of about four crore boxes.

Besides Shimla district, which alone accounts for 80 per cent of the total apple production, most of the apple cultivation is concentrated in the districts of Kullu, Mandi, Lahaul and Spiti, Kinnaur and Chamba.

Trade insiders told IANS the apple market scenario this season indicates that imports from China and Washington have gone down and the demand for produce of Himachal Pradesh and Jammu and Kashmir, which is of a superior quality, will capture the market in Delhi and Kolkata.

Growers fear the non-arrival of 'ladanis', the fruit wholesale buyers who come from other states like West Bengal, Maharashtra, Uttar Pradesh and Karnataka, can also upset their applecart.

"The harvest cannot be delayed at any cost. If harvest is forced to be delayed, it will result in huge losses," Sandeep Tegta, an apple grower of Kotgarh in Shimla, said.

"The lockdown has resulted in piling up of stock and there are close to 200 workers at our three facilities -- Rohru, Rampur and Sainj in Shimla district," said an official with Adani Agri Fresh Ltd, which is engaged with over 20,000 apple farmers in the state.

He said several workers, a majority from Nepal, have returned to their hometowns and the company has arranged for workers to stay back comfortably.