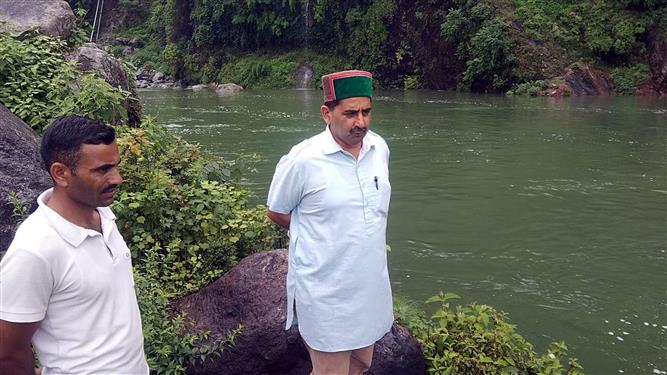 Congress secretary Kewal Singh Pathania taking information about the condition of artificial lake in Gaj Khad at Gera on Saturday.

An artificial lake has been formed in the Gajj river in the Ghera area, 5 km from Dharamsala, threatening the habitations downstream. Sources said the lake was formed after landslides blocked the river flow yesterday.

Kewal Singh Pathania, general secretary of the Himachal Pradesh Congress Committee, visited the area. Talking to The Tribune, he said people living downstream the Gajj were living in panic. The district administration and the state government should take immediate measures to drain out the water from the artificial lake because in case it breaches, it can cause damage to properties and harm people. There was thousands of cusecs of water in the lake, he said.

There is no need to panic as experts are keeping a watch over the artificial lake. —Nipun Jindal, kangra dc

Kangra DC Nipun Jindal said a team of PWD officials had been sent to the spot to inspect the lake. Though water was flowing through the lake, efforts were being made to mechanically drain out the water from it, he said.

The sources said fearing a breach in the lake, many people had vacated their houses.